A walk down memory lane of the legendary TJ’s. 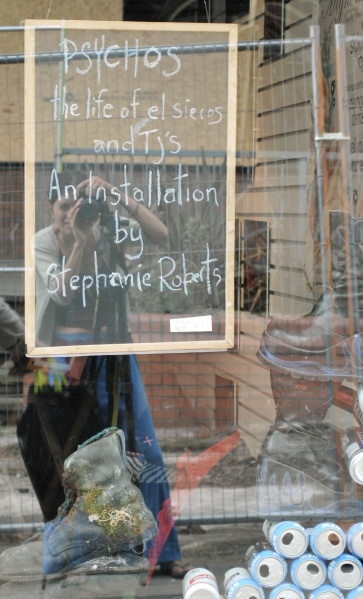 ‘Psychos – the life of El Siecos and TJ’s’ was a Pop Up installation created as a direct response to the death of TJ’s / El Siecos legendary front man John Sicolo and a tribute to his devotion in supporting emerging bands.

John’s personal ambition to provide a music venue in Newport, advertised as the ‘toilet circuit’ or “vital music venue” became an important and respected contribution to the music scene in the UK and abroad. Emerging rock and indie musicians had a specific venue to debut their sound and attracted bands including Muse, Oasis, Manic Street Preachers, Green day and Misfits, to name a few. Catatonia filmed their single “Mulder and Scully” at the venue and it was allegedly the place that Kurt Cobain proposed to Courtney Love.

John Sicolo passed away on 14th March 2010 leaving a legacy that Newport and many musicians around the world will never forget. On 10th July Newport’s John Frost Square, became a venue with the Goldie Looking Chain headlining the acts, where 100’s of supporters payed their respects to the legacy left by John. ‘Psychos – the life of El Siecos and TJ’s’ opened at the Empty Shops Project the same week.

Words like these from American musician Phil Hill, were the catalyst to my response to John’s death and became the inspiration to create a ‘scratch and sniff’ interpretation of TJ’s. I wanted to create an environment that played with the senses, referencing music, its eccentric decor, quirky features, artwork and trademark sounds, as regular supporter of the club between the late 80’s and ’90’s I also had personal memories to explore.

In effect I was creating a ‘last chance to say goodbye’ as the nightclub closed immediately after John’s death.

This installation was about the people who frequented TJ’s, it was about their stories, music, fashion, and memorabilia. Dean Bettis, much respected musician and owner of Criminal Records became the front man of the collection of objects for the exhibition with so many local artists, musicians and ex ‘punters’ willing and wanting to contribute to my call out on social media and at Criminal Records.

My desire to create a replica bar and stage with fulling working music kit and backdrop became a reality. A sticky floor that smelled of stale beer accompanied the walk around the venue, leading to the cat walk made of beer cans and fag ash that displayed the shoes of ‘punters’ and performers. Mannequins hung from the ceiling dressed in some of the iconic fashions of the clientele and musicians of TJ’s.

Artist Andy Nawroski was an essential practical support to the project’s considerable work load to assemble the memorabilia and objects loaned to the exhibition. Andy also exhibited his surreal camera sculptures, that appeared to followed you around the space, almost suggesting the capturing of moments past. Rare footage of Muse gigs were projected onto the wall while others were covered in the ‘iconic look’ of posters in TJ’s interior, cave like decor, fake tree that welcomed you through the doors the experience was almost complete.

The most poignant aspect of this installation was the replica TJ’s bar. John was known to sit at the end of the bar with a cup of tea in the later years. I asked the Sicolo family if they would like to place a personal memory into the installation, Leanne John’s daughter, kindly donated a personal photograph of her father and a pair of his glasses. These items were placed along with a cup and saucer at the bar, his seat represented as a half mannequin emerging from the bar stencilled with 1944 – 2010.

The installation was created in association with the Empty Shops Project supported by The Arts Development team and was funded by ACW to create a series of pop- up exhibitions spaces in Newport in 2010. 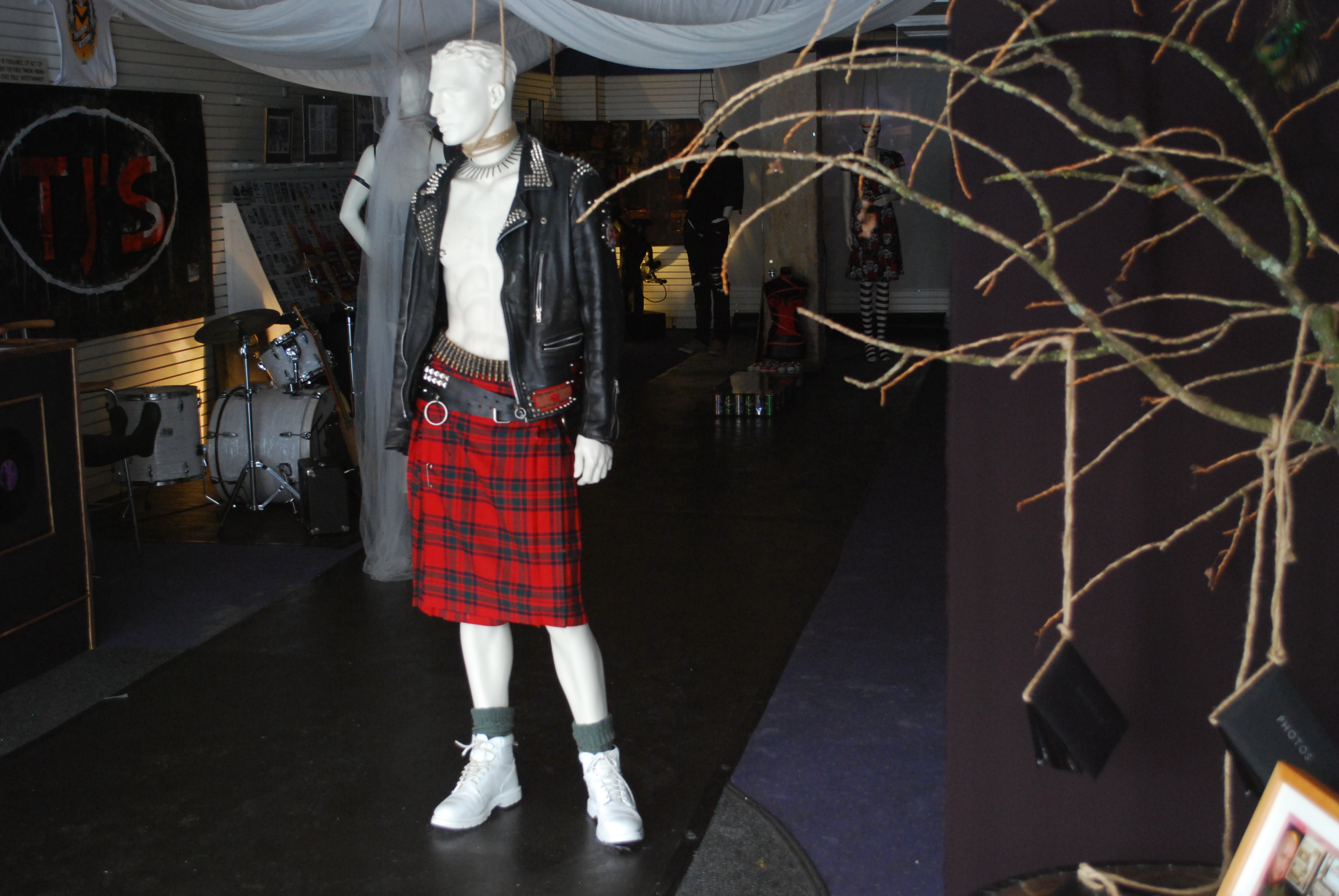 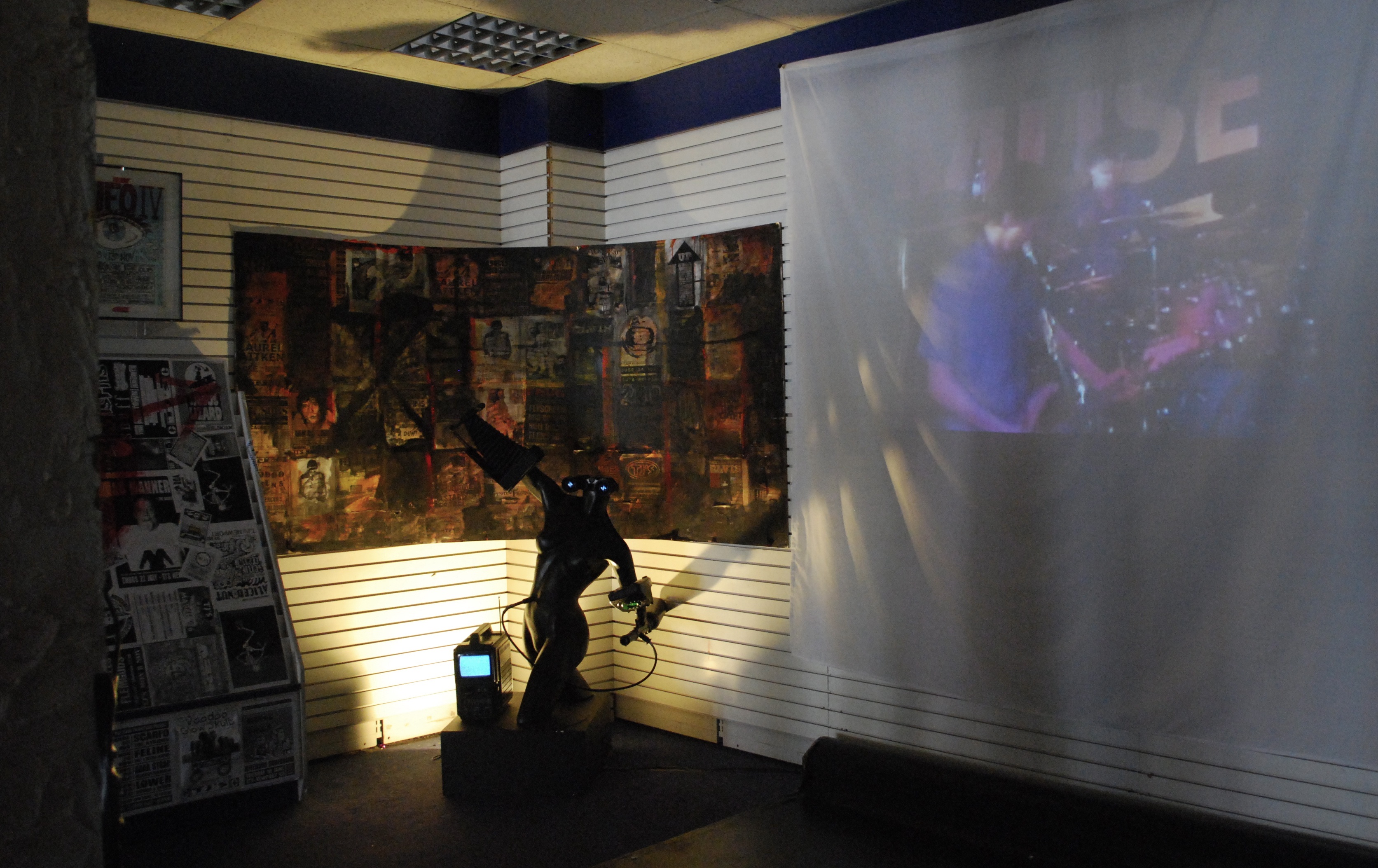 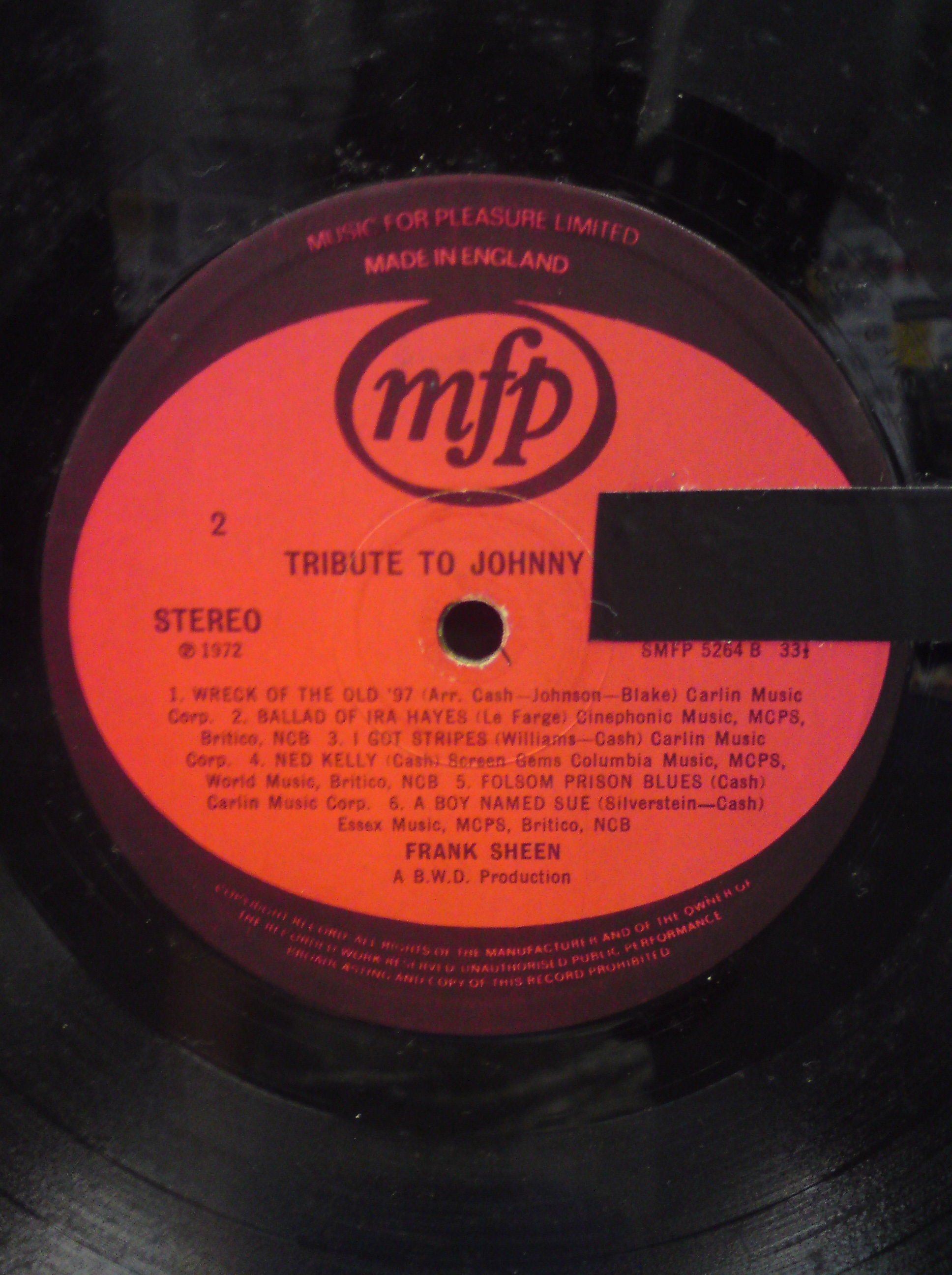 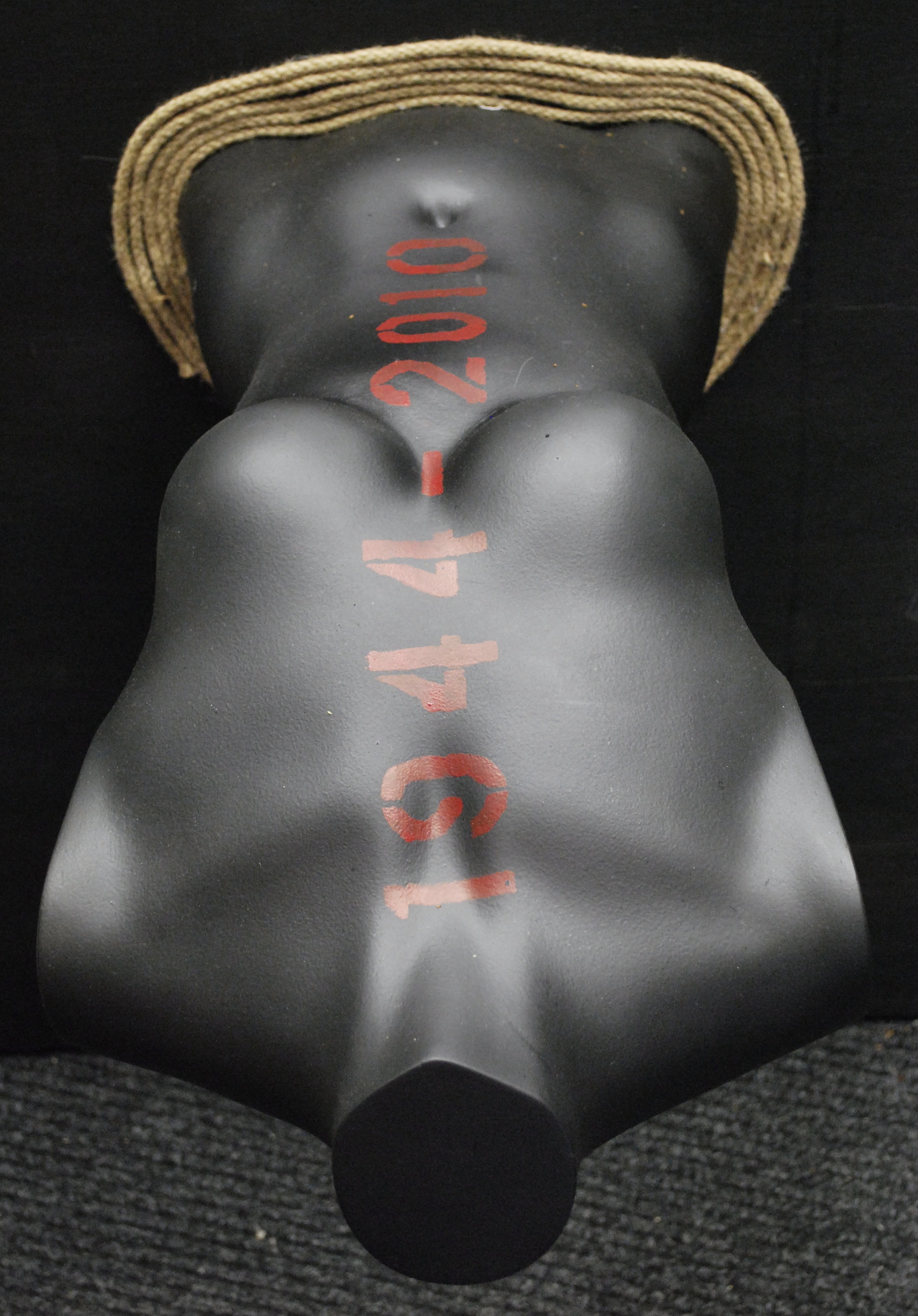 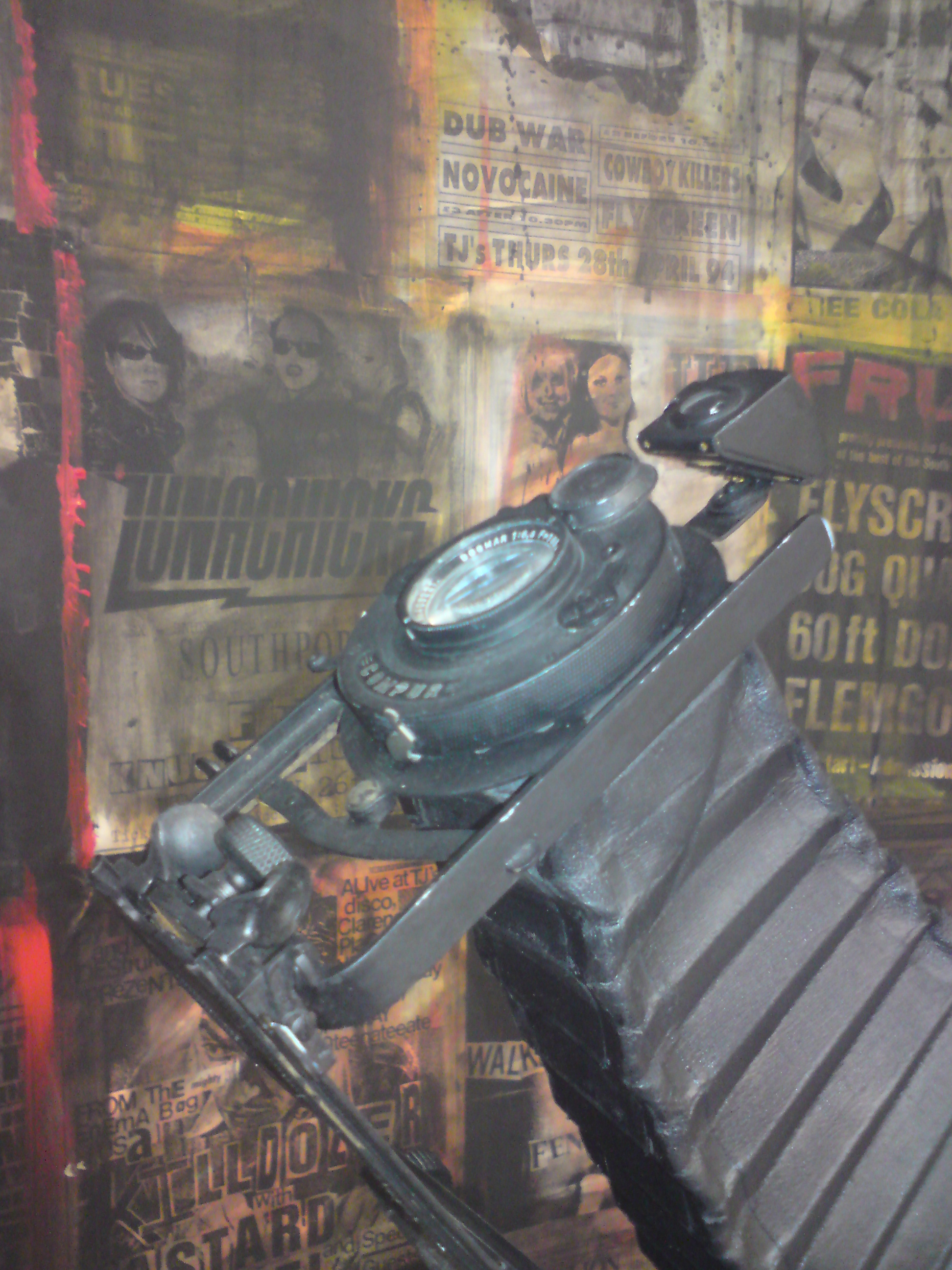 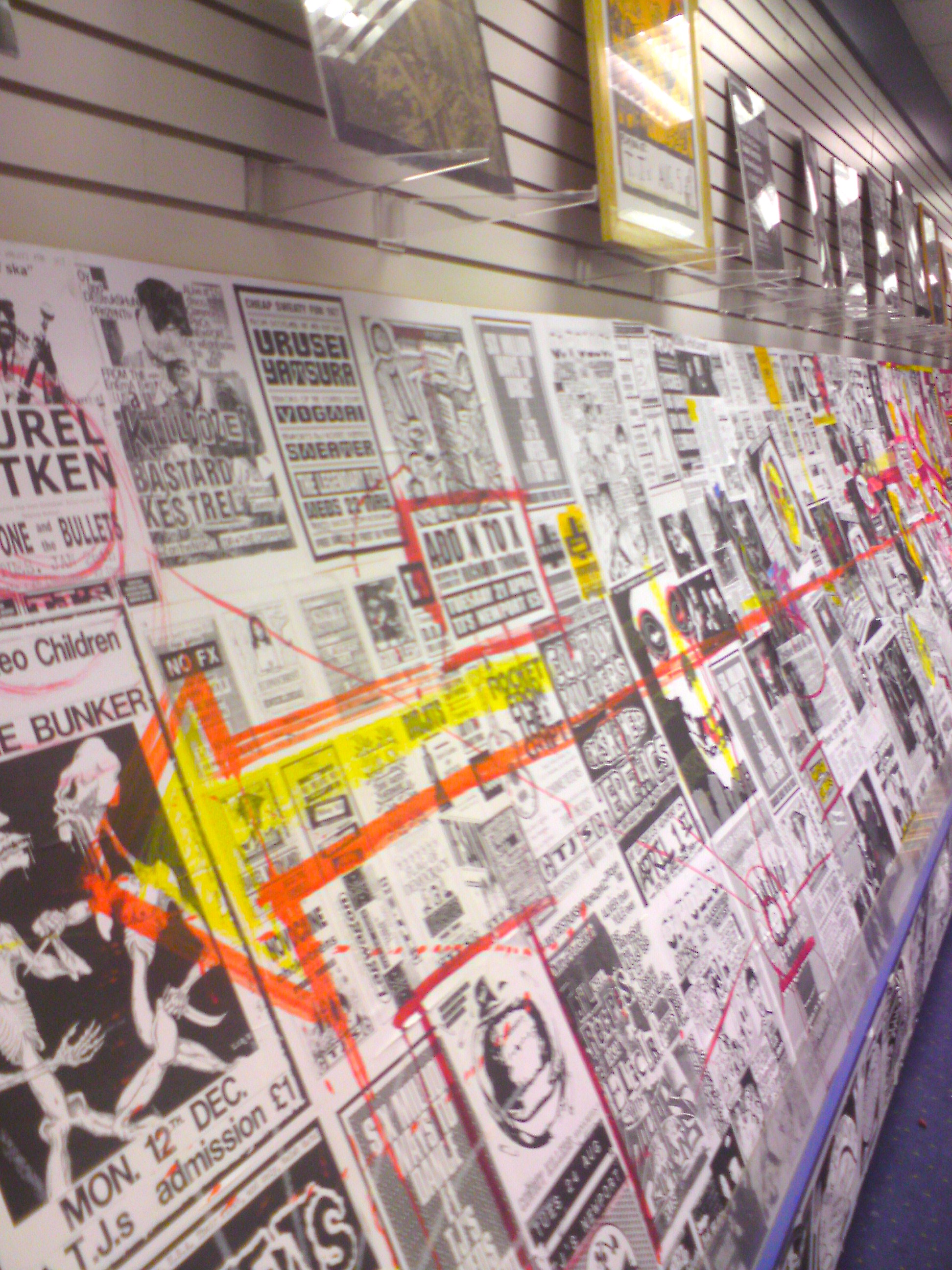 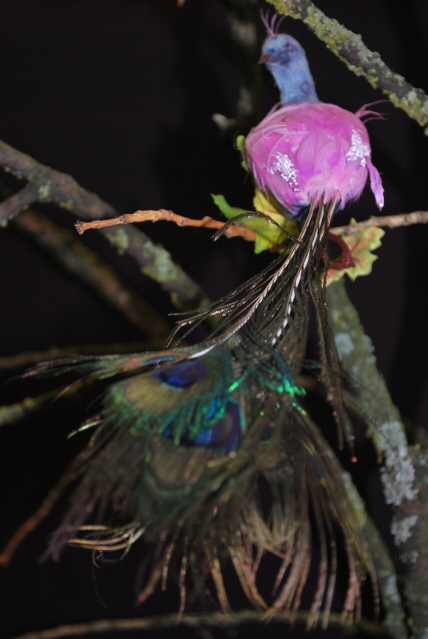 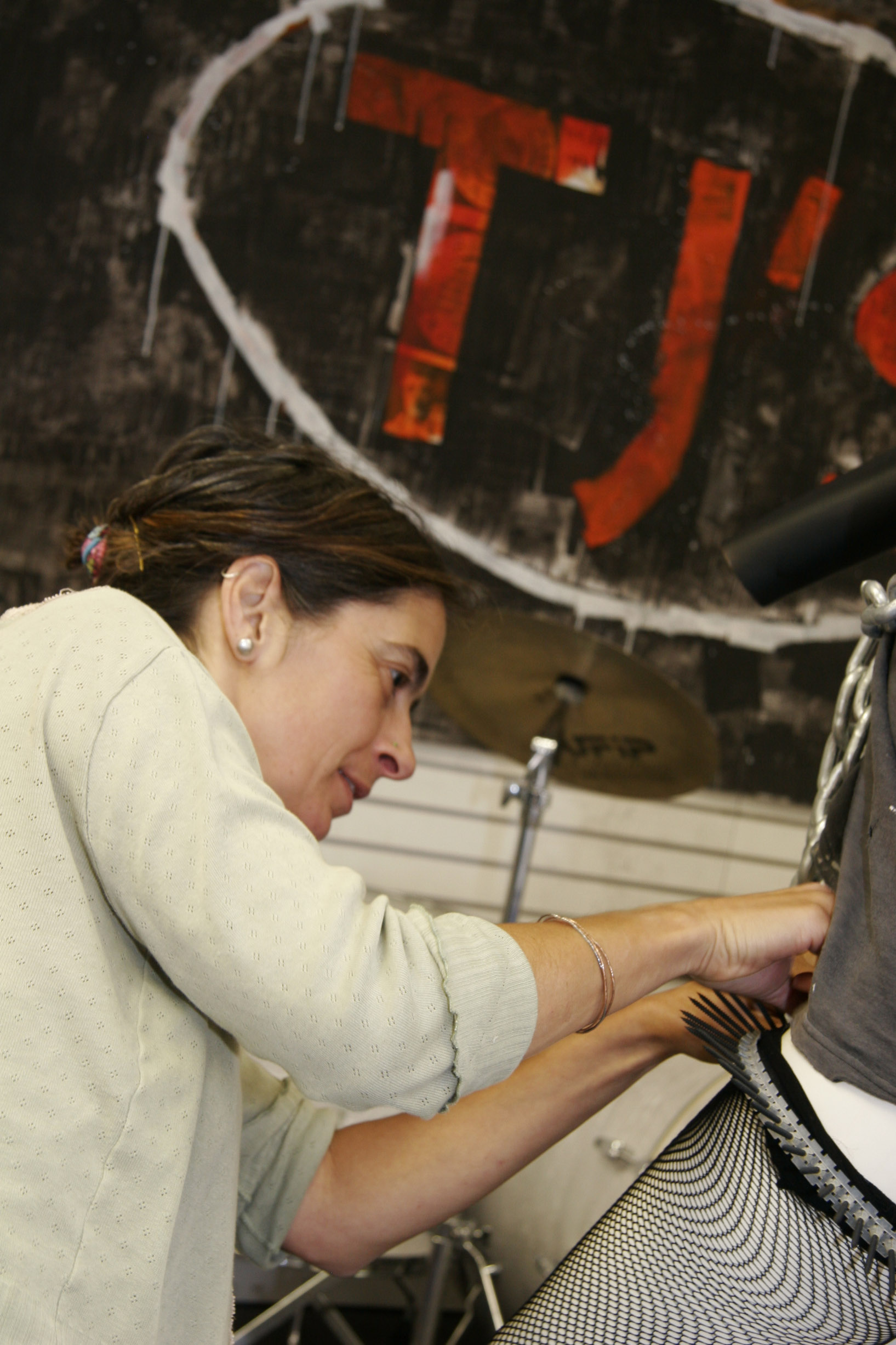 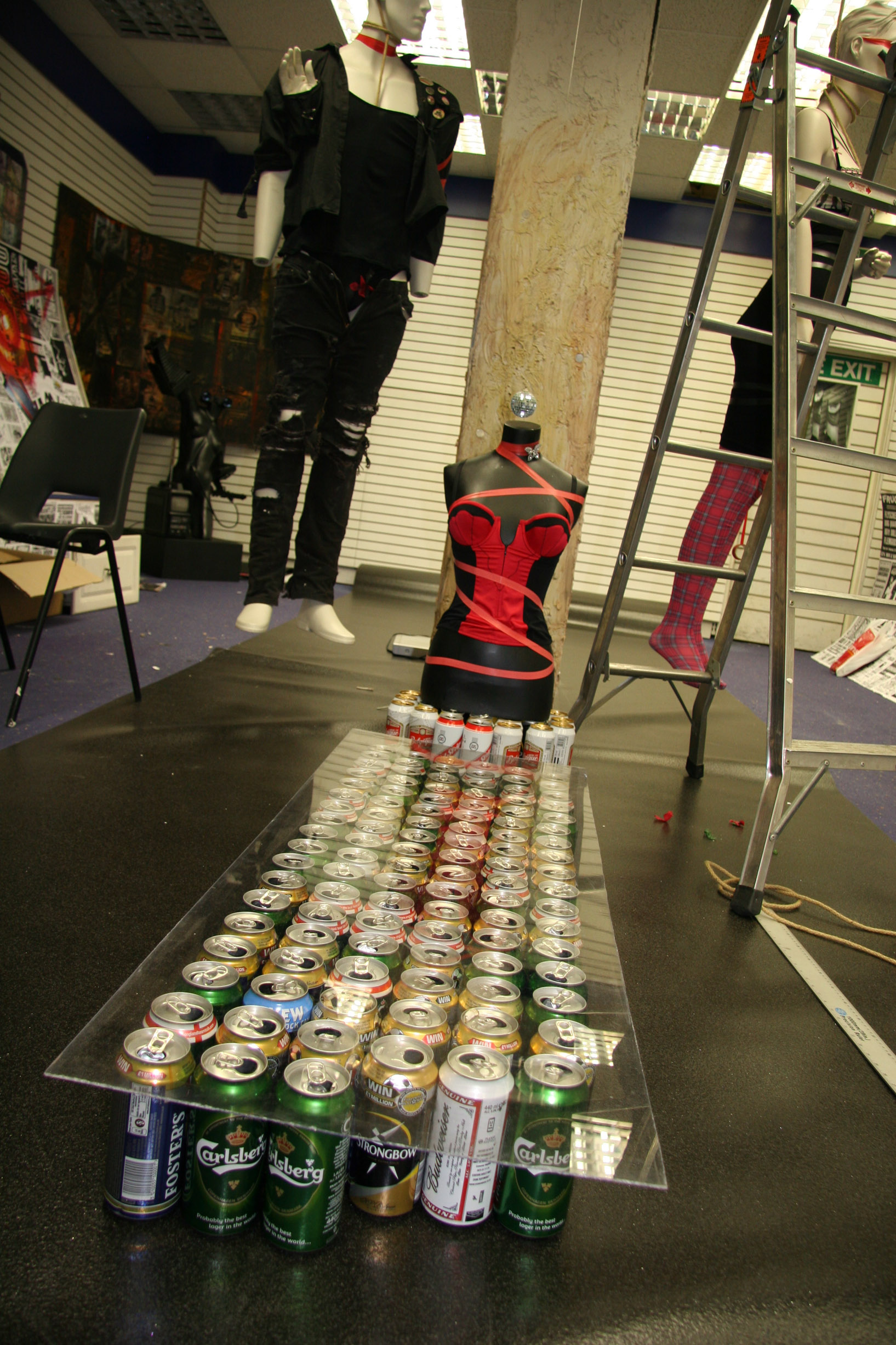 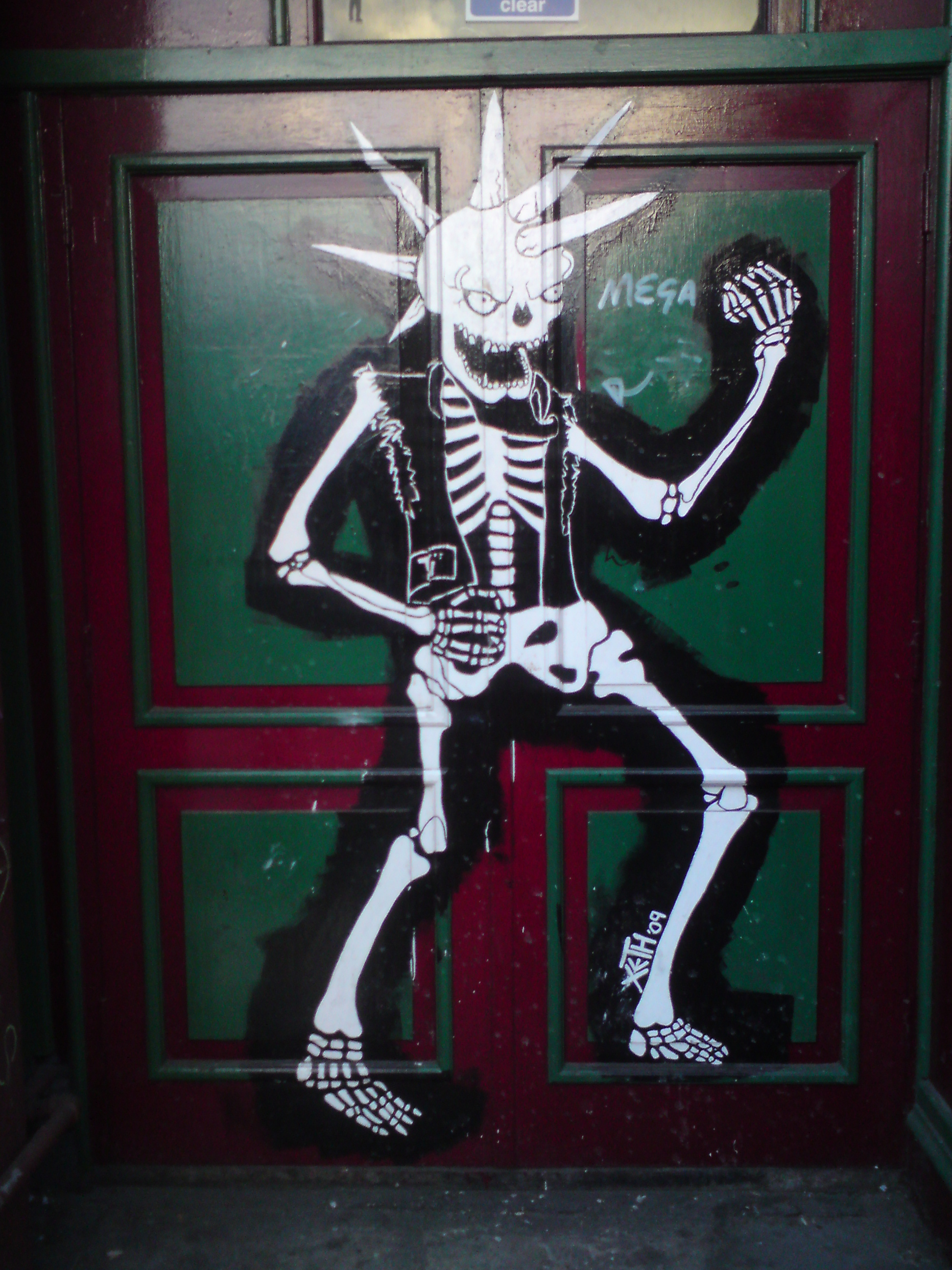 One of the painted exterior doors at TJ’s. Artist Xeth. 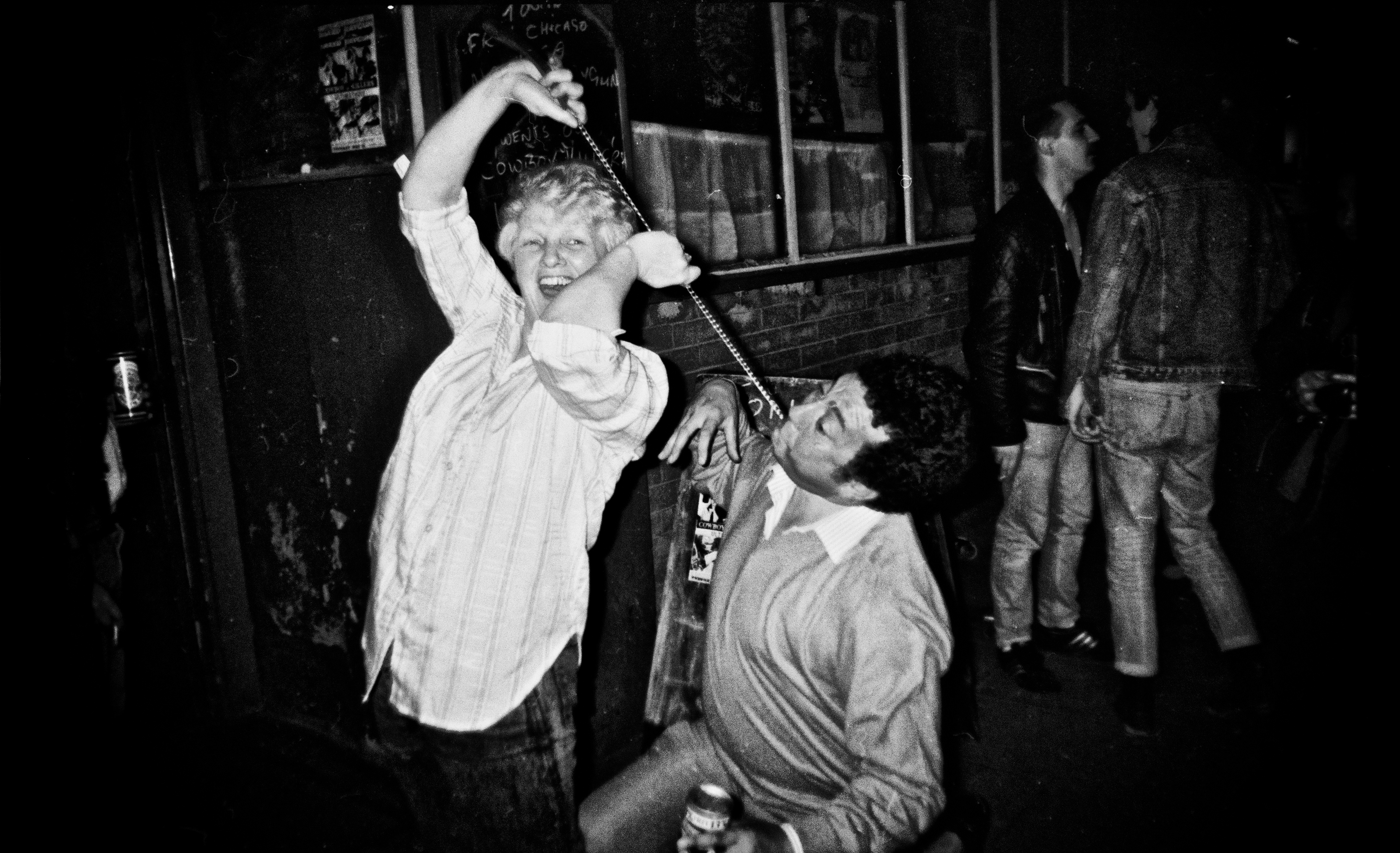 Trilby and John outside TJ’s 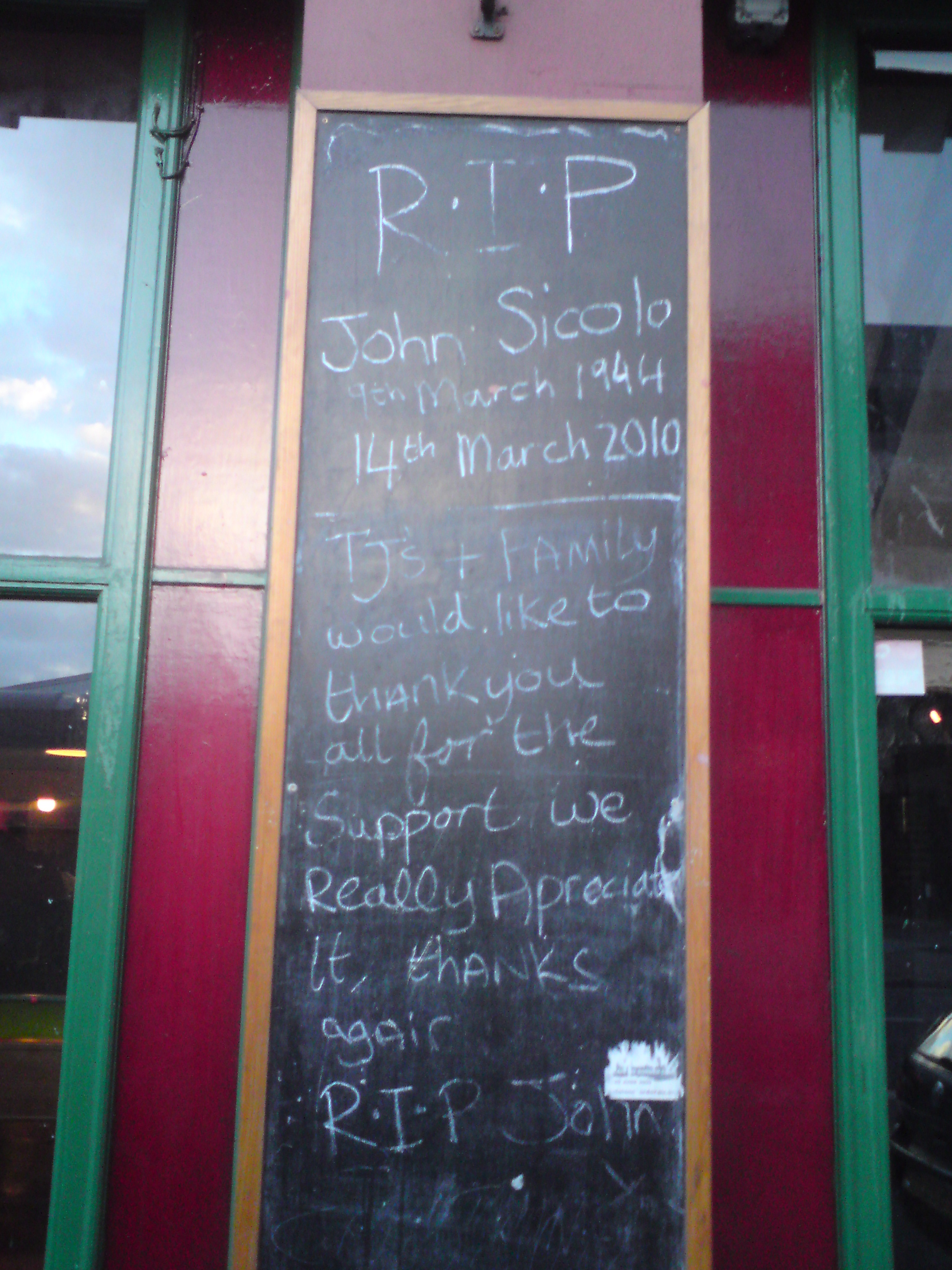 “The world of rock owes you big time. An unsung local hero.”