Newport City Council's Pillgwenlly Regeneration Framework included initiating a series of art commissions supported by the Welsh European Funding body. I was awarded by Pill Regen the commission to redevelop the Old Town Dock site in Pillgwenlly. It was my intention that this project supported the sustainability of Pill and Newport's local businesses and art practitioners. Collaborations, construction requirements, artists and materials were sourced locally where possible.

'Newport artist Stephanie Roberts created With Passing Ships from the very essence of Pillgwenlly. Through historical research, exploratory walks, artistic collaboration and through immersing herself in the community, Stephanie has unearthed a multitude of stories stretching back to the very birth of Pillwenlly. These stories form the core of With Passing Ships and in retelling them, Stephanie has revealed Pill's rich, vibrant and multi-layered essence.

Through the initial collaborative design process with artisan blacksmith Nick Jones, the concept of a schooner ship sailing the River Usk was developed. A series of three sails would depict Pillgwenlly from its foundation, through its triumphant industrialisation to its current position as an exciting cultural and creative force.

Stephanie took inspiration from many sources. The work’s title was extracted from Newport poet WH Davies’ poem In May:

Full of sweet books and miles of sea,

With passing ships in front of me.

From this tranquil beginning, explorations into the docklands and industrial heart of Pill revealed the materials which would influence the look and spirit of the piece. Railway sleepers, telegraph poles, steel, fauna, wool, nails provided a rich palette from which Stephanie could illustrate the stories collected through community workshops, research and her daily encounters with the people of Pillgwenlly.

In his design of the main solid steel mast, Newport blacksmith Nick Jones has paid homage to the toil of Newport’s steel men and dockers who forged the foundations upon which the town’s fortunes grew. Dramatic hammer blows along the mast honour the work of the blacksmiths invaluable to the docks whilst exaggerated details of rivets and pins indicate Newport’s status as one of the world’s major industrial ports. “I felt it important to represent the old way, of how it continues to hold up the new fragile way of our throw away world, how it sits quietly in the background without fuss, calmly holding everything together”

The sails themselves were an assemblage of materials and the result of collaboration with Newport artists, painstakingly arranged by Stephanie in clear cast resin.

Each sail is adorned with an iconic face, each representing a particular stage of Pillgwenlly’s development. These faces loom large, illustrating the broad themes but closer scrutiny reveals hidden treasures within the mosaic of information, stories entwined with the area’s past slowly unravel to expose the communal foundation upon which Pill is built and continues to grow.’

For further reading about each sails story please scroll below images. 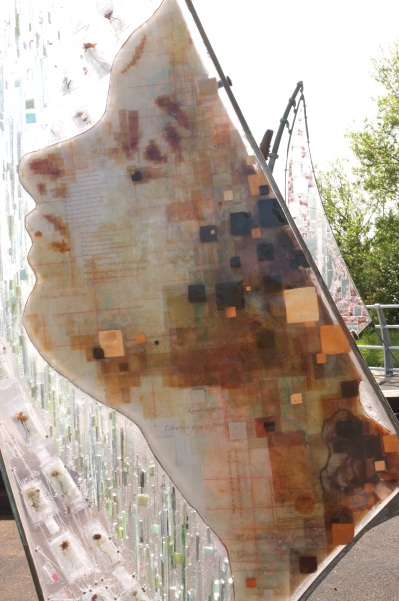 'The Land of Opportunity' 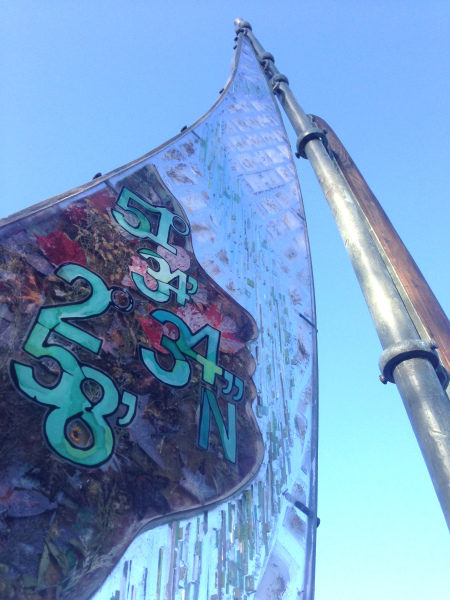 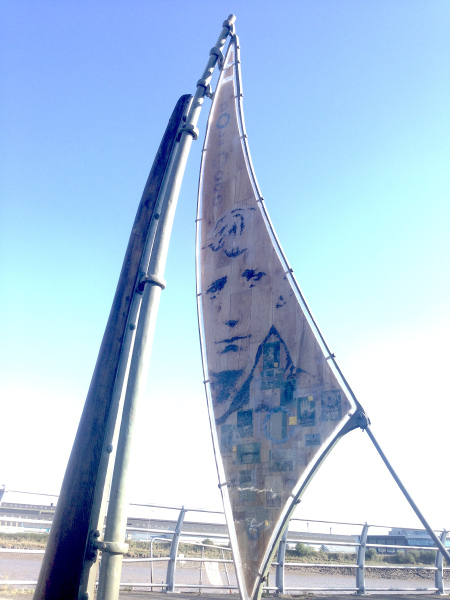 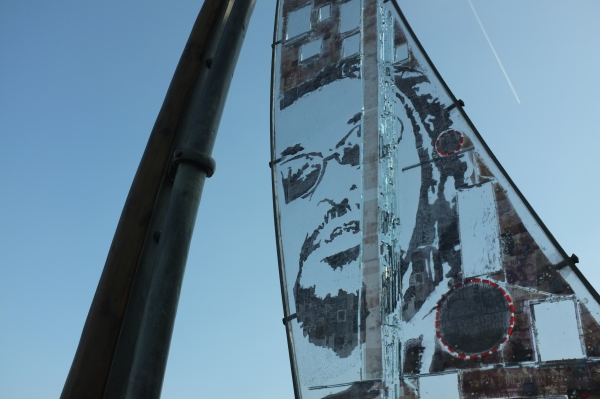 'The Face of Pill' 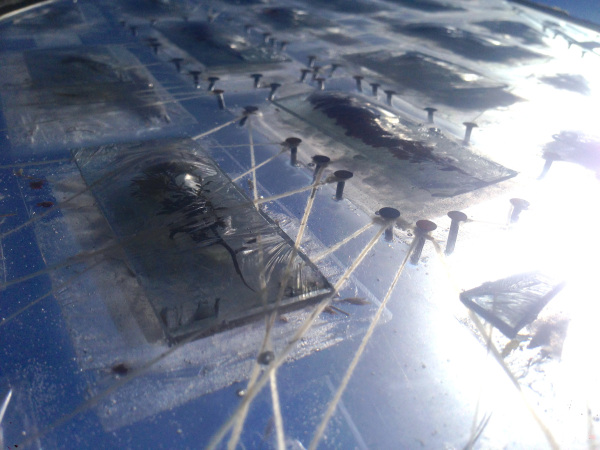 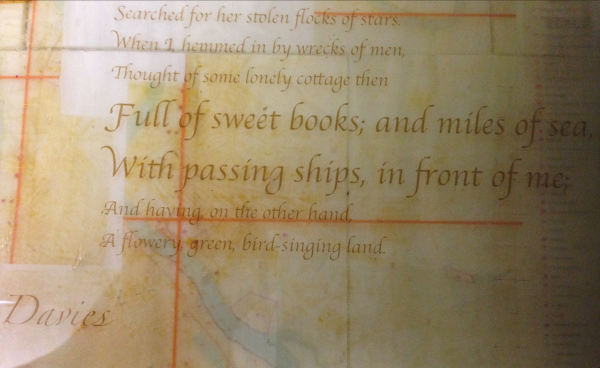 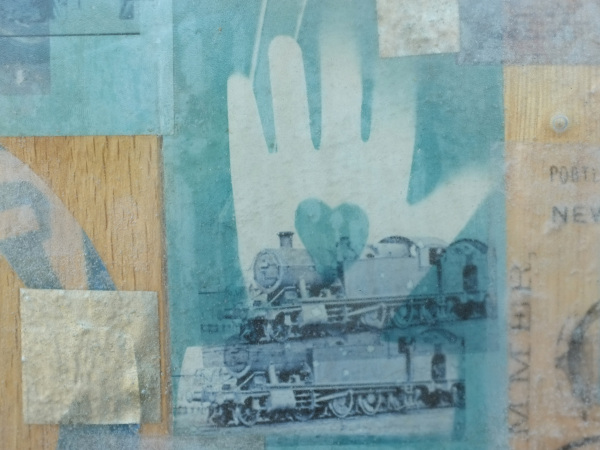 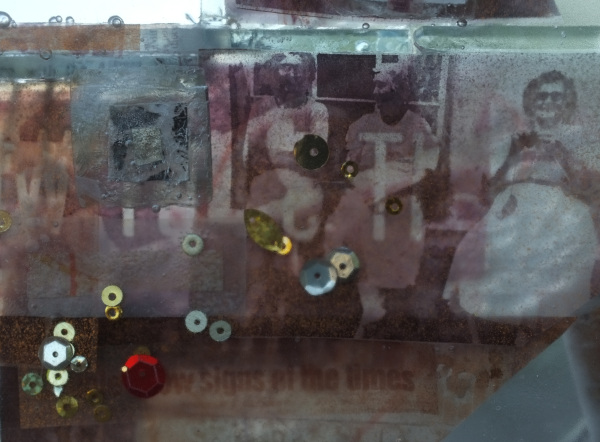 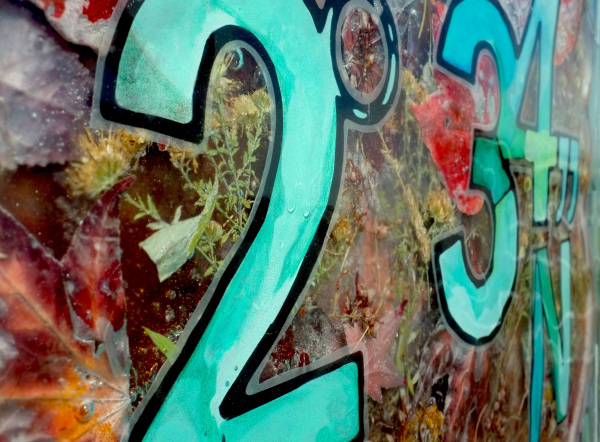 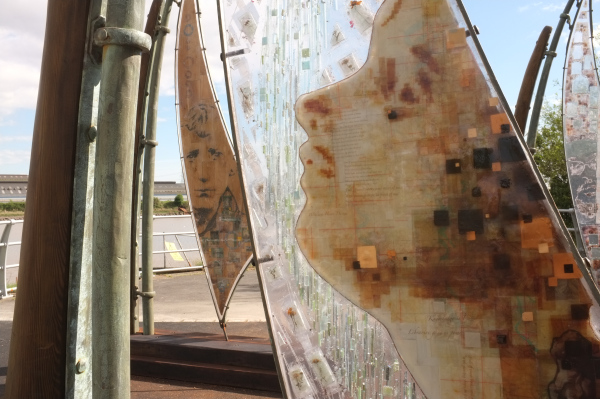 ‘With feminine grace, a figurehead maintains a keen lookout towards the future, where the seeds of industrialisation take root in the marshlands to the south of Newport. Emblematic of the sea-bound trade upon which Newport’s fortune was founded, the figurehead projects a beam of connectivity into the heart of Pillgwenlly. Along these tentative traces, communities would soon flourish, linking the heart of Pill directly to the trade routes of the British empire.

Wild flowers and fauna decorate the sail, these estuarial foundations ripple within the grid formation, a lattice of docks, the embryonic development which would soon transform the area.

Collaged from antiquated local maps, the figurehead casts a watchful gaze into the heart of Pill, surveying carefully secreted moments of the area’s history within. Delicate scrutiny reveals the strong literary heritage of Newport and its surrounds, from WH Davies to the Manic Street Preachers. Also embedded in the work, clues to the origin of the name Pill.

Coordinates of the Old Town Dock, designed by Steven George Jones, position the work more precisely. From here tendrils of spun sheep’s wool spread into the broader locale, echoing the import and export trade which reached into the heart of the area and the resultant settling of the ships’ crews and their families.

A “plucky little chap” of 15 years, Tom Toya Lewis stares out from the midst of Newport’s industrial heyday, an emblem of local character in an age of when great expansion and change might be seen to subsume individual identity. Through his story, Stephanie advances a metaphor of strength and resilience emerging from daily hardship, the struggle of those who faced the darker side of Pillgwenlly’s changing fortunes. Newspaper cuttings of Tom Toya Lewis’ story embroider the sail throughout, sewn together with wider motifs of the area’s industrial and economic growth.

Technical drawings of the Transporter Bridge merge with archives of Associated British Ports, offering a broad context against which Stephanie projects humanist details of philanthropy, valour and persistence. Godfrey Morgan, 1st Viscount Tredegar, who did much to alleviate poverty within Pill, stands tall amid references to industrial growth. The presence of Tom Toya Lewis nestles defiantly amongst ABP ledgers of arrivals at the docks. Examples of literary influence which began with the first sail, flow into the second with WH Davies’ Autobiography Of A Supertramp and the Manic’s championing of libraries bestowing power, as well as a continued reference to the origins of the name Pillgwenlly.

Discrete hints of contemporary business ripple through ghostlike maps of the docklands’ prime. Pill’s Cattle Market and the Mission To Seafarers feature as symbolic pivots, places where economic concern also served social need. Resulting from community workshops and exploratory walks, Stephanie subtly illustrates the connection of Pill’s past to its present within a tangible frame, constructed from materials familiar to the area and its trades. Historic research and photographic excursions ally and seek common ground. Abstract photographic prints produced in the Mission To Seafarers offset the harshness of nails and oak, symbols of shipbuilding and construction: nails the binding element through the three sails; wood the material which has longest served the import/export trade upon which Pill flourished and still relies.

THE FACE OF PILL

The creative and cultural force of contemporary Pill is celebrated within the third sail, taking street art as its foundation. Artist and performer, Marega Palser undertook a walk through Pill, drawing observations and chronicling encounters with residents and traders. Styled upon graffiti stencilling, Marega’s work reveals an inclusive community based upon pride and respect. Stephanie takes Marega’s work and from it conjures up the striking portrait of Skindred vocalist Benji Webbe. The patina of Marega’s drawings and Stephanie’s portrait of Benji subtly referencing Pill’s industrial past.

Community workshops produced intricate insights into varied cultural backgrounds which frame empty spaces within the sail, metaphoric windows revealing Pill’s breadth of cultures. Sequins scatter and shimmer across swathes of gold and luscious blues, which in turn offer up discrete clues to Pill’s vibrant cultural fabric, its strong boxing heritage and the celebrated annual Pill Carnival. Portraits of the traders on Commercial Road, grocers, barbers, florists, publicans flow through the sail alongside portraits of the artists contributing to the project.

At the centre of the artwork is Stephanie”s arresting portrait of Benji Webbe, a proud Pillgwenllian who promotes messages of positive action and social unity through his culturally layered music. Benji’s story and music embody the spirit of Pillgwenlly:

“It was only a place like Pill that I could have been inspired so much to make the music I have made, the diversity and many cultures of the our community is something we all should keep a light and pass on! My father came to the UK from the West Indies in the late 1950s, I came to Pill from Ringland on a number 8c in 1980. This is the place I’ve always considered home and that is where the heart is!”‘

Historically, the Pillgwenlly area of Newport was a thriving neighbourhood, housed many of the dock-workers and their families at the start of the 20th century. Newport owes much of its growth to the dock industry and Pill was central to this and the wider development and growth of Newport as a whole. As Newport’s docks expanded during the first quarter of the 20th century, Pill witnessed rapid growth, expanding northwards towards the centre of the city. Due to the investment and confidence in the area, Pill’s buildings reflect the wealth and status of the area but the decline of heavy industry in South Wales and the subsequent decline indockland activity, Pill has undergone a marked change. Today, Pill is among the most deprived wards in Wales. NCC