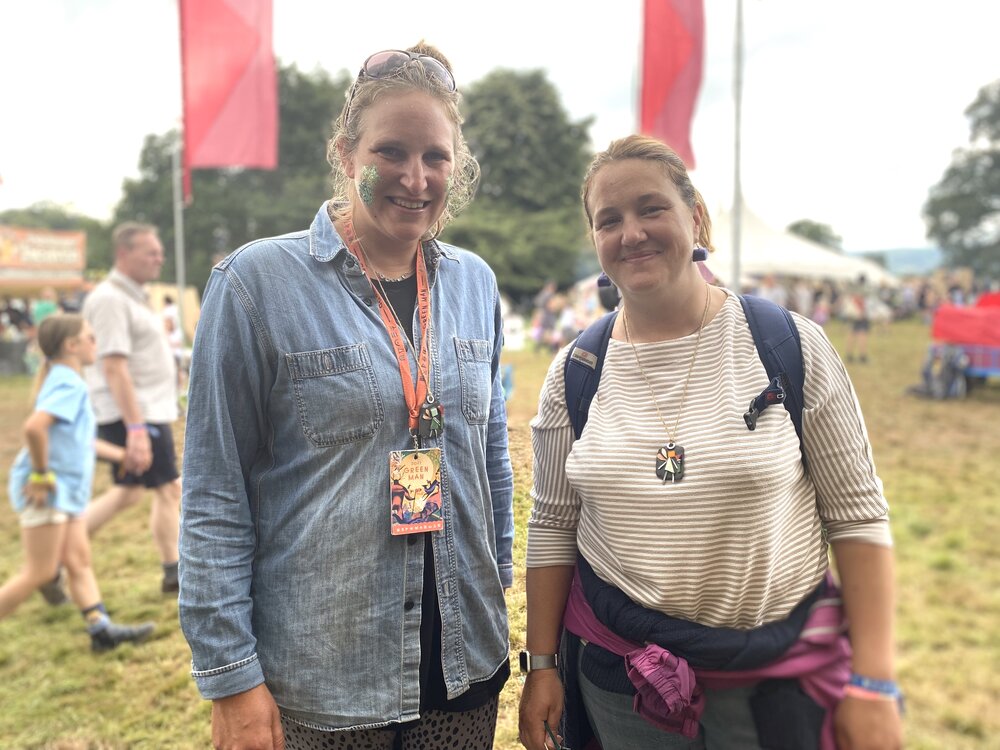 #beyoursafespace @Greenman Festival 2021
The story so far..
For those new to the Street Fairy project, it launched in March 2021 and represents my visual and written response to my emotional concerns regarding the safety of women and girls in public places. For many, Sarah Everard's death has heightened our fears and continues to have an impact on our daily lives.
As the following quote from an article published over 120 years ago demonstrates.
“It’s sad to think even at the present day, women cannot go out and return home without the fear of being molested. It seems to me, highly necessary to discuss the subject from all sides and find it both possible to find a preventative and a remedy today”
Womenhood Magazine 1898.
Surely it is time for change?

Please use the word as the title of the email and explain why you think this project is worthwhile.

Your support could make a difference. 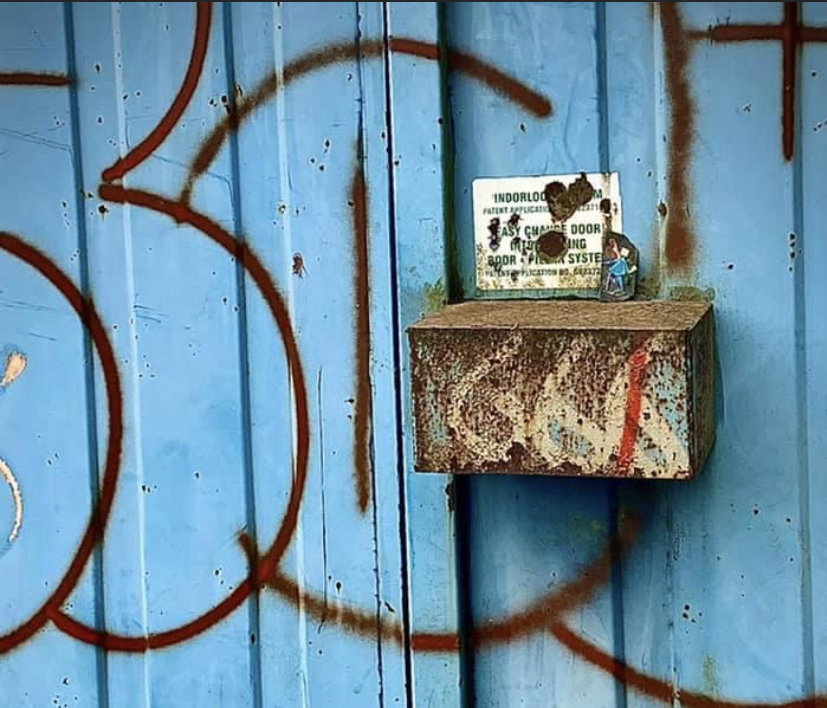 As a community artist, I feel I have a social responsibility and an opportunity to take action, use my voice and respond to this topic of personal safety in our communities. My aim is to connect to the emotions of others, to bring an air of comfort, reassurance and solidarity to both individuals and social groups. Whilst acknowledging that concerns about safety in public places impact on everyone, my attention at present focuses on all women and girls including those within LGBTQI+ communities, although men and boys must be present within this action.
I began my wave of action by making and sharing mosaic ‘Street Fairies’ across my community in Newport, South Wales and further afield. Created from the waste products from my mosaic studio, the Street Fairy is a symbol or amulet, that promotes a sence of safety.
Many women from my community requested a Street Fairy, sharing with me how this symbolic object, gave them permission to re-address moments in time where abuse had taken place and take a step in making the memory or experience, form a stage of healing.  Encouraging women and girls to reclaim and change the energy in places where they feel unsafe. 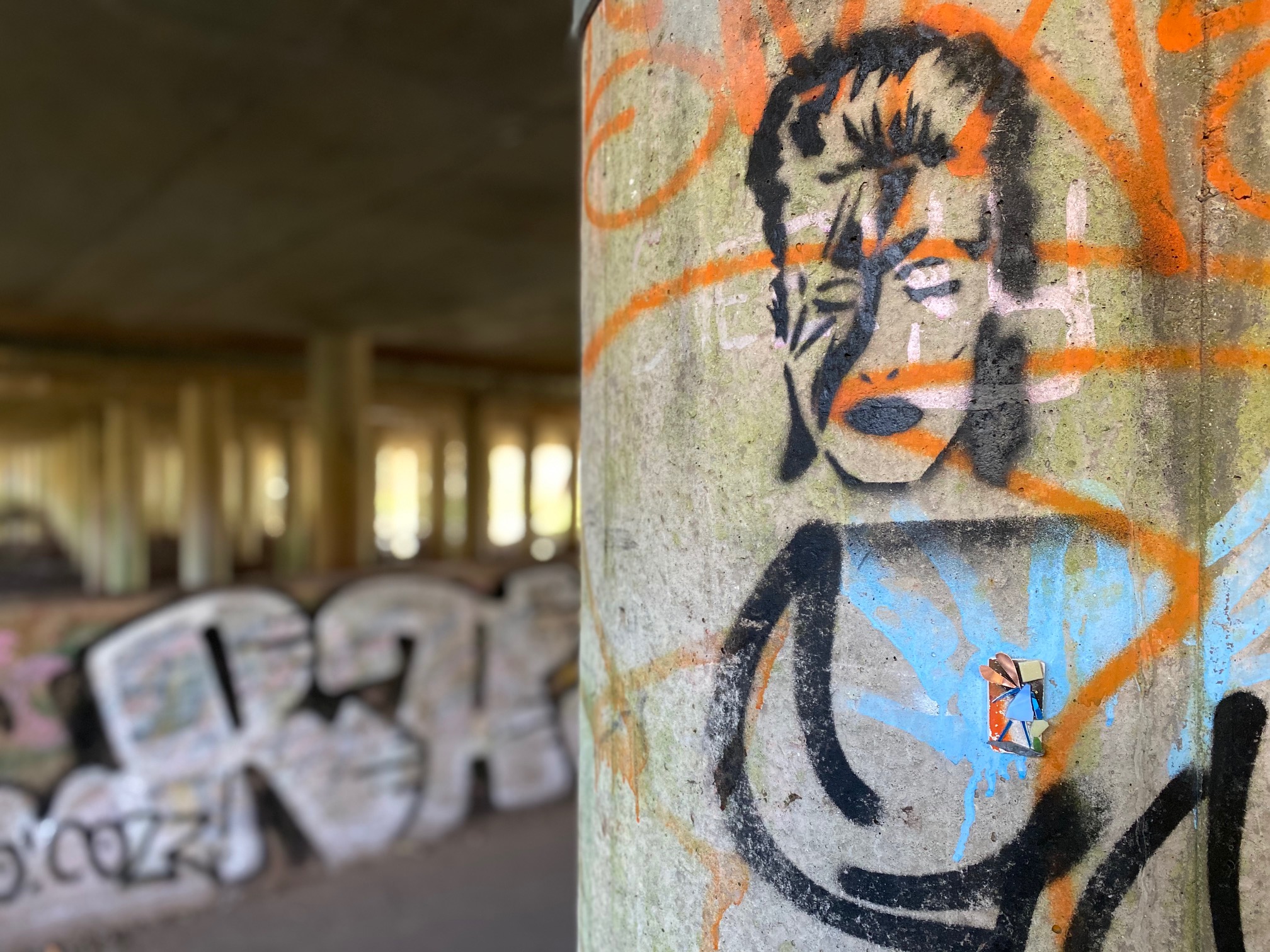 Maintaining the sustainability of the project has come from personal sponsorship and contibutions to the making of each fairy, with a local city councillor joining the list of names who felt this action had a significant purpose. On route New Pathways, a local charity that supports people who have been affected by rape or sexual abuse have recieved donations as sister form of support for this action.
Over 185 fairies were initially delivered, sponsored by over 60 individuals who had requested fairies for themselves, their wives, sisters and daughters. Using social media sites, Facebook and Instagram,to draw more interest and demand for the action to continue. My local newspaper, the Argus, covered the story in April in an article entitles, “Newport Fairies to change themindset and help women feel safe”. 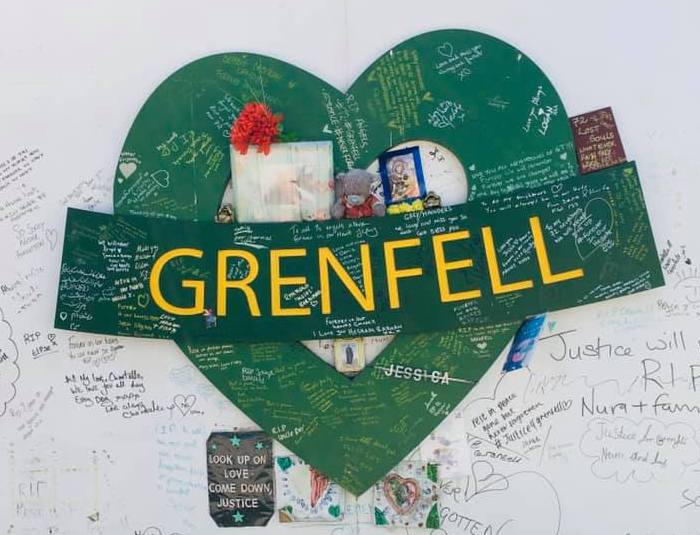 Feeling a necessity to connect with my community socially, I created an outreach workshop in the centre of the City hosted by local pub, Le Pub and supported by New Pathways. The workshop gave individuals and families the opportunity to take part in the cathartic process of making fairies for themselves while raising awareness of and money for New Pathways.
This outreach has now stimulated further action with workshops reaching women and female minority groups, in partnership with Newport Live, GoGIrls, charitable trusts that promotes the health and well-being of people in the city and surrounding areas. 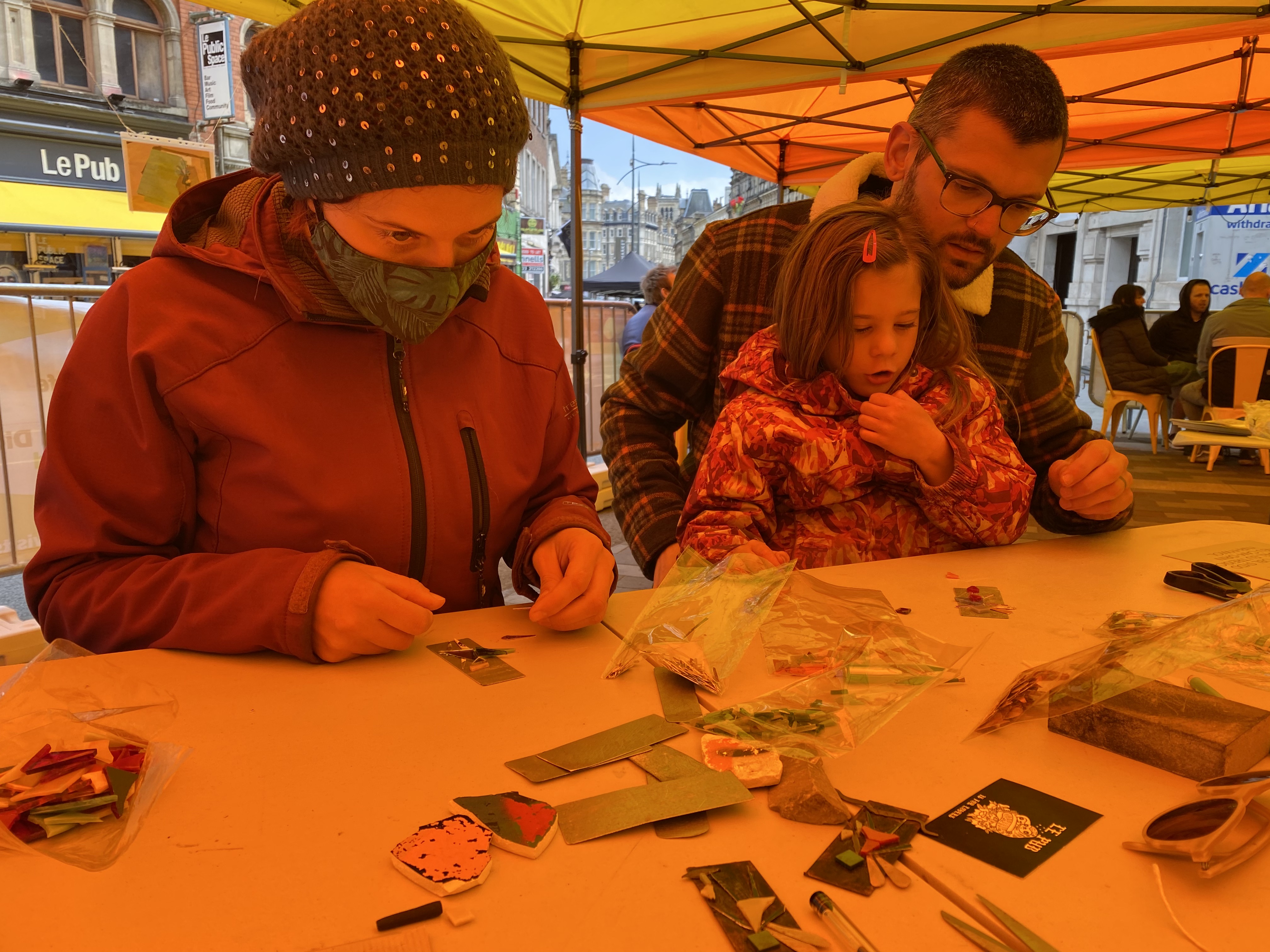 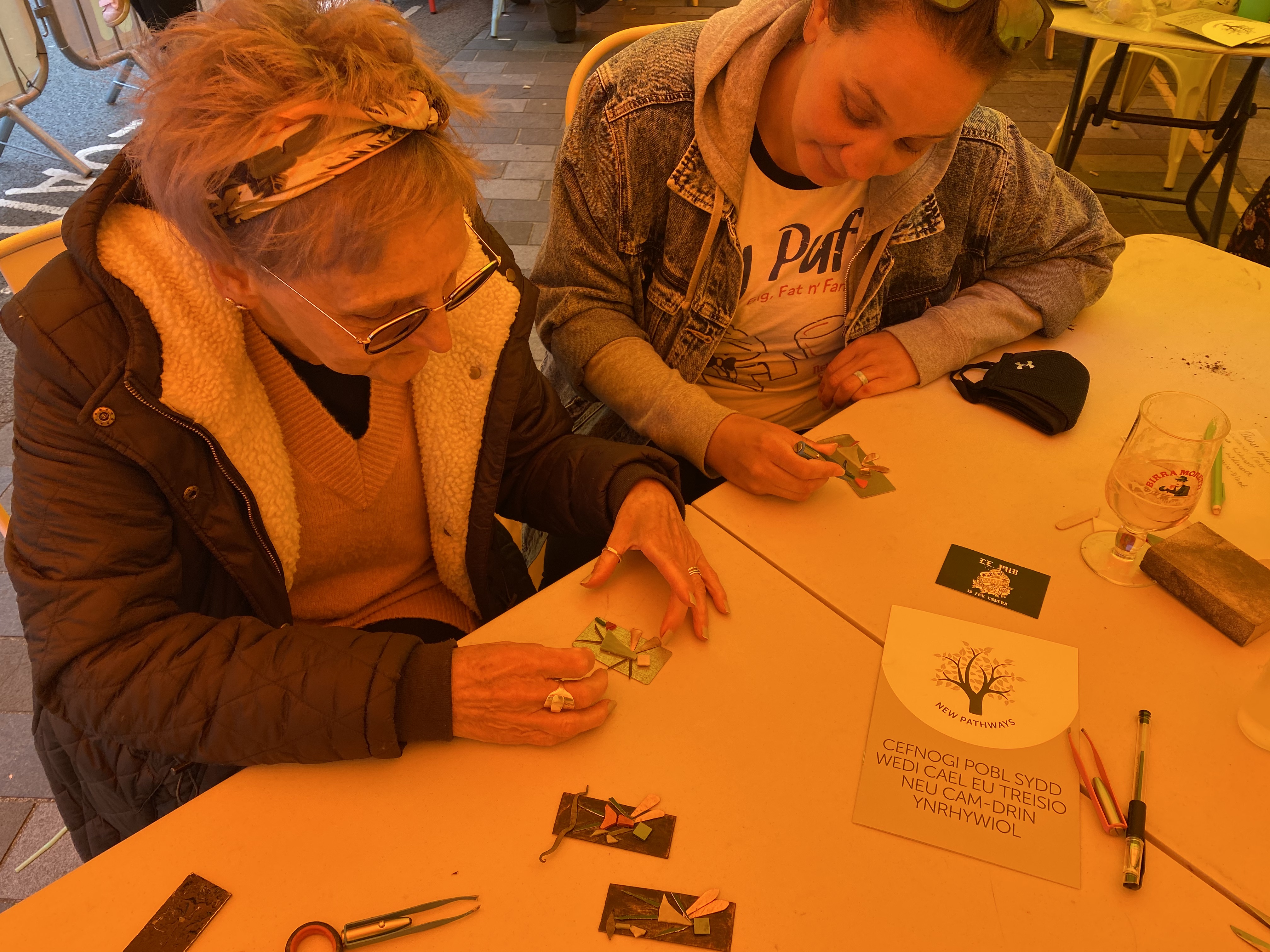 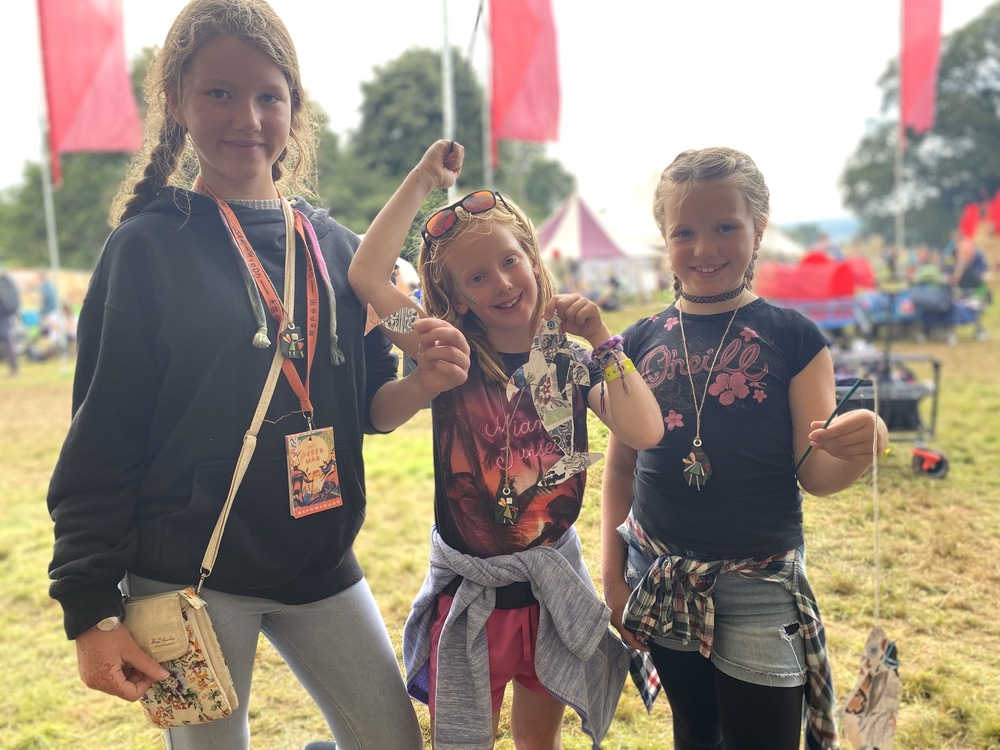 The second chapter of the Street Fairies action heads in a new direction and began as my artist friend, Bill Chambers invited me to work in the ‘Little Folk’ field with the Hotpress Kids Workshops at the Greenman Festival, located at the foot of the Black Mountains in Wales. As a community artist and festival enthusiast, I was all in for the opportunity to engage with children through making, absorb the festival experience and embrace an opportunity to extend the Street Fairy campaign.

On listening to an item addressing the safety of women at festivals on BBC Radio 4’s ‘Women’s Hour’ it seemed to me that Greenman was the perfect venue to spread some Street Fairy love, spread positive energy, empowerment and a sense of safety into its women.

The first fairies were given out at night. With many festival goers experiencing their first  landscape of 'freedom' from the confines of the pandemic. I began to gift fairies. 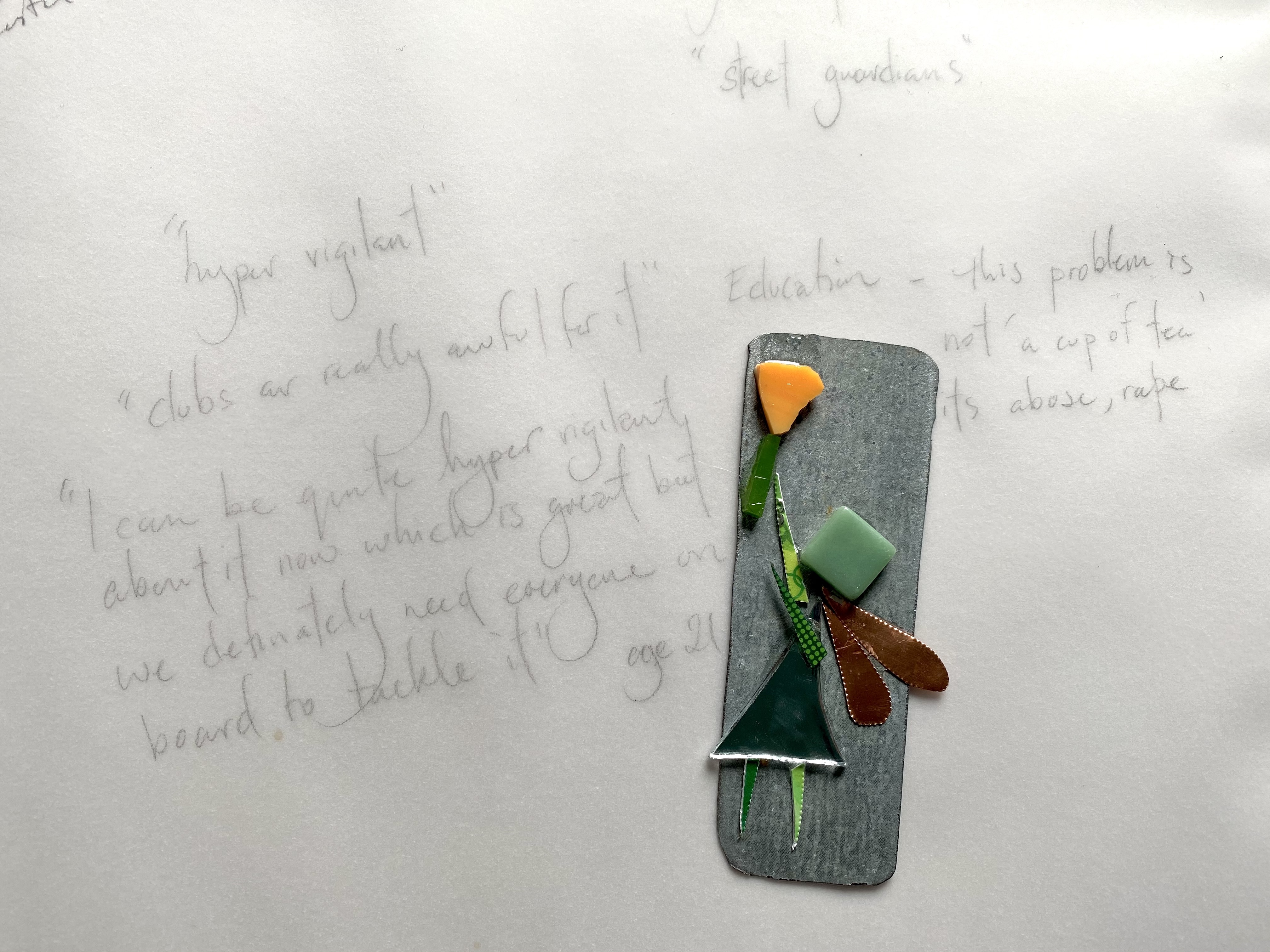 Whether removing a fairy from a collection around my neck or pulling one from my pocket, each fairy was placed in a women’s hand. I repeated “Be your safe space, share your safe space”. In return I was given an incredible visual display of gratitude. Every time a delighted response. Replies often, “really?.. for me??” “Of course for you” I would return, followed by a mutual warm Welsh cwtch or squeeze. They were moments I will hold with affection.

My words were said to encourage thoughts about what a safe space is. Initiating thoughts maybe about internal safe spaces, staying vigilant in puplic spaces and monitoring self or/and others, in social spaces. A reminder to protect yourself and others from harm.

I’m unclear if it was the simple gesture of giving that touched people so. Even before their gift had been explored they were uplifted it seemed. But after discovering the detail encased in the object held in their hand, they were moved and honoured, it seemed, to have been chosen for such a gift. Many straight away placed their fairy around their necks, holding them tight or pushing them into their chests. They thanked me for my generosity and shared their gratitude for my sharing such a powerful symbol. With one young women replying “How did you know I so needed this, right now?”, suggesting I mysteriously knew her situation.

She was sat alone in the dark, I had a hunch that a street fairy was what she might have needed to give some support. 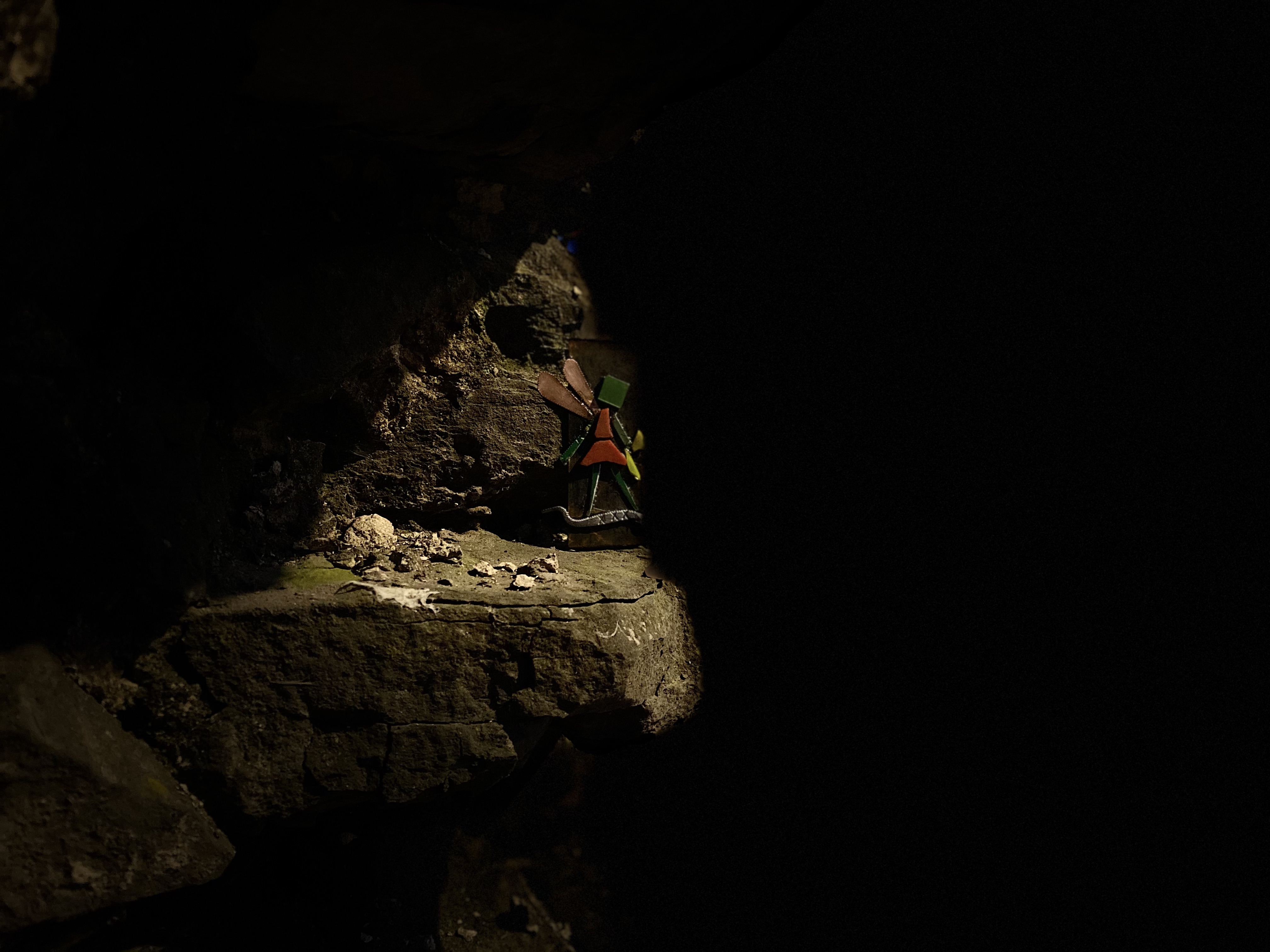 I don’t know exactly what directed my decisions to give. I didn’t have enough fairies for all the women at the festival so I had to make choices. Some people looked like they needed a supporting force to help them find their way through the festival environment. Others were young women having such a lovely time, and families too. I felt compelled to give them an amulet to remember that feeling, that safe space, that happy space surrounding them at that moment. I guess I tapped into instinct.

I took very few photos of individuals with their fairies. The fairies were gifts. I did not want to take back the intimate gift of sharing by photographing the moment. The few photos I do have were taken when people told me they wanted to remember that particular moment themselves, a moment I was delighted to share. 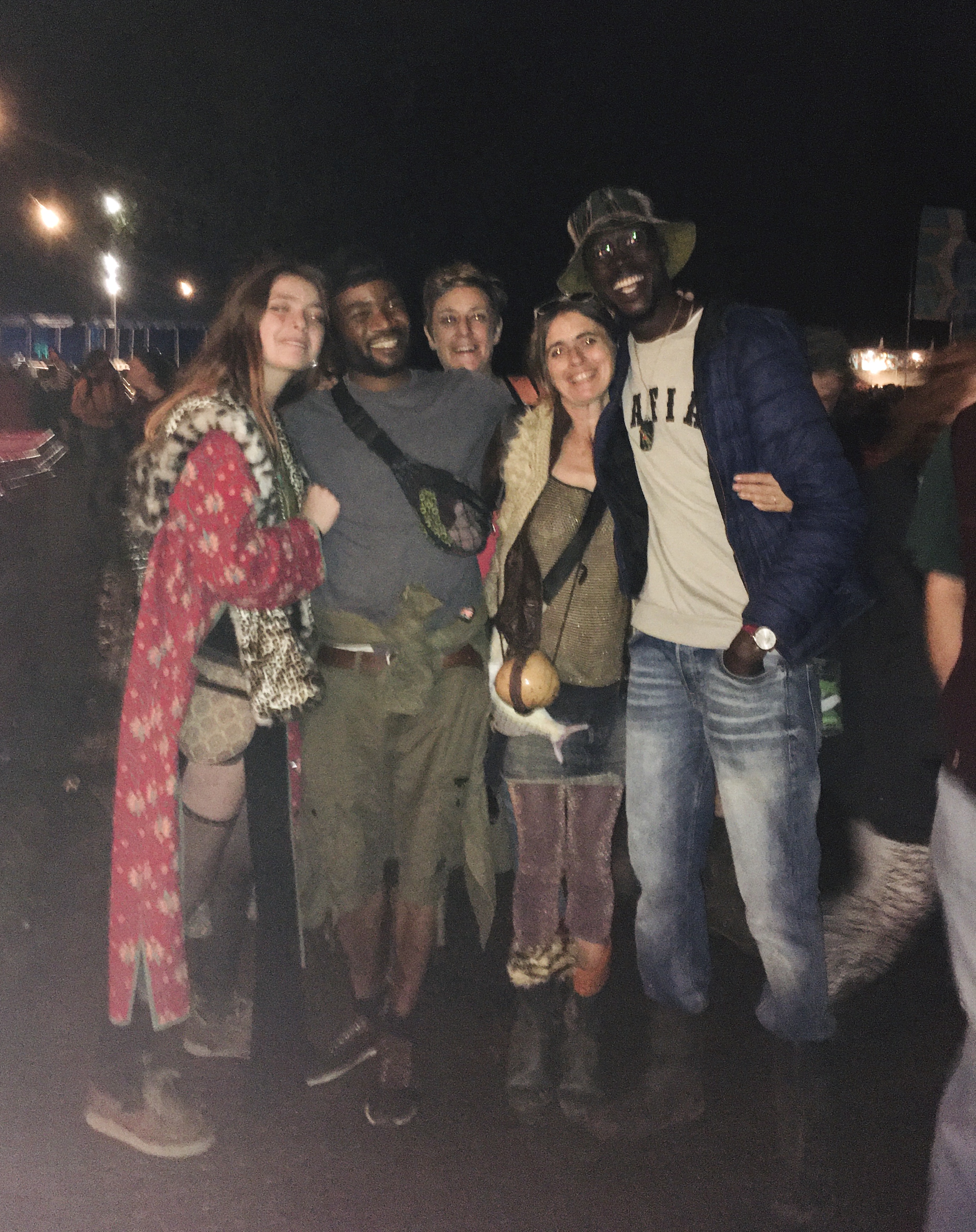 As the weekend progressed, the question of men receiving a gift became important to address. How could I walk past a man who looked in need of a safe space? Morally that sits far too uncomfortably for me. So why not give the opportunity to become a safe space for others, as well as feel safety themselves? I gave out 17/88 fairies to men, with the option for them to gift them on or keep them, their choice. I wonder what were their thoughts and actions after our interactions? 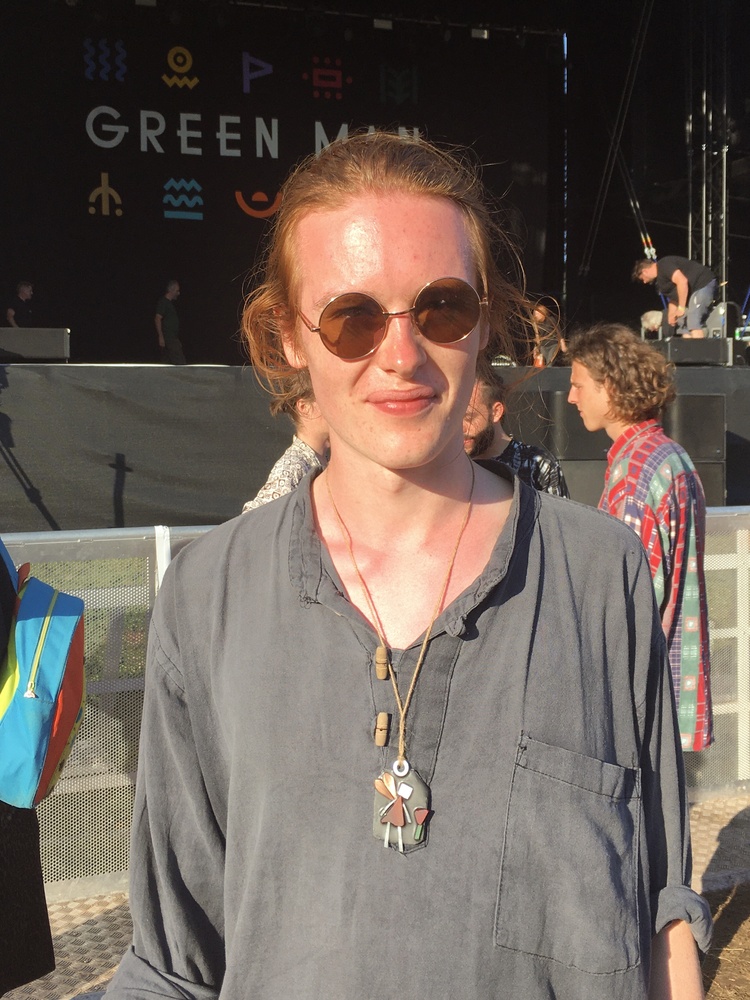 What I do know was It was an honour to give to all genders and offer that gift of choice to men. Sharing that sense of safety is all encompassing, all inclusive and socially unbiased. I will re-engage with men and boys at a future stage in this action. 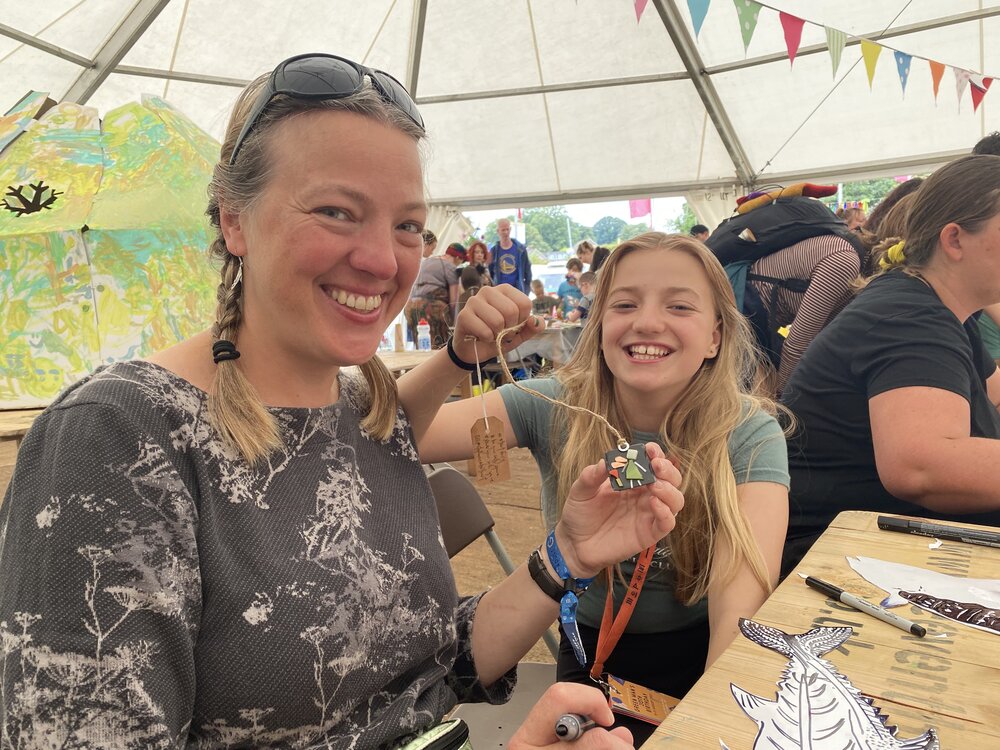 Some of the most poignant and in-depth conversations I had were with the children and the parents attending the ‘Little Folk’ field. As parents and children were settled in making their creations for the parade, I embraced this given moment and shared Street Fairy’s. In a more relaxed and sober environment, conversations about the safety of children, in particular girls, on the street and at festivals were free flowing. I shared my concerns regarding my own daughter and her friends. They looked at their children, expressing their fears for their girls as they mature into teenagers and young adults. There were strongly emotive conversations reaching to the question ‘What do we do to create permanent change and positive action?’ 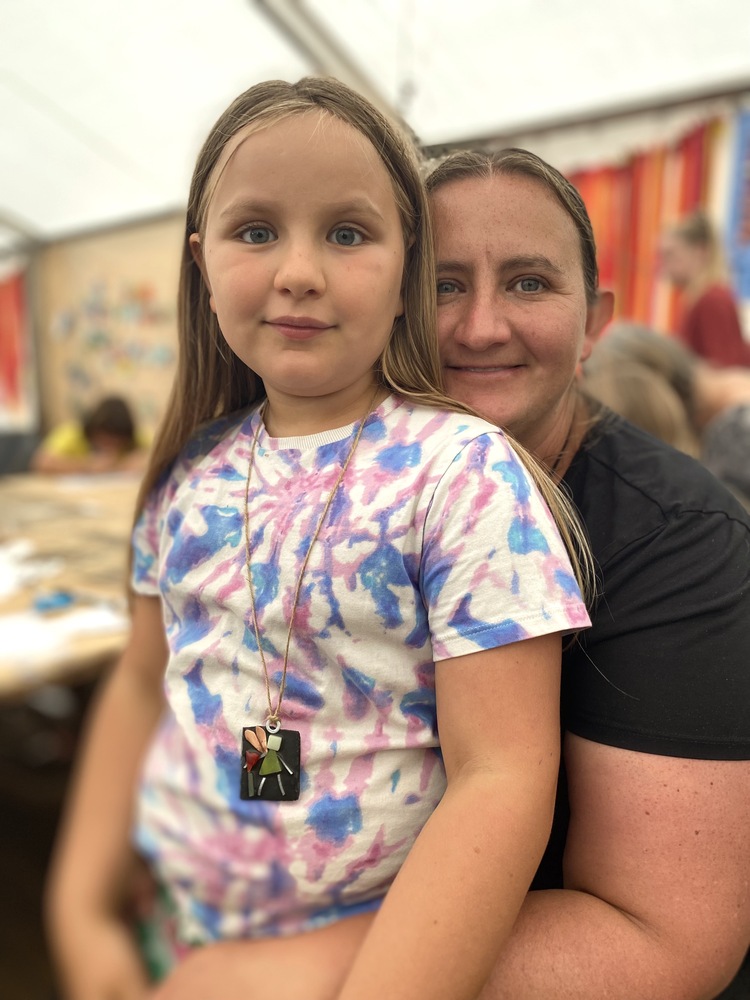 Focussing on the potential of the Street Fairies, I shared an idea with them about creating ‘Street Fairy’ workshops at festivals next year, located ideally in the dedicated fields for teenagers. The workshops would give young people the opportunity to learn the process of creating a mosaic fairy for themselves and the emotional journey of this emotive process. They would be encouraged to personally gift the fairies they’d made at the festival, taking ownership and control of their vision of safety.

Please use the word as the title of the email and explain why you think this project is worthwhile.

Your support could make a difference. 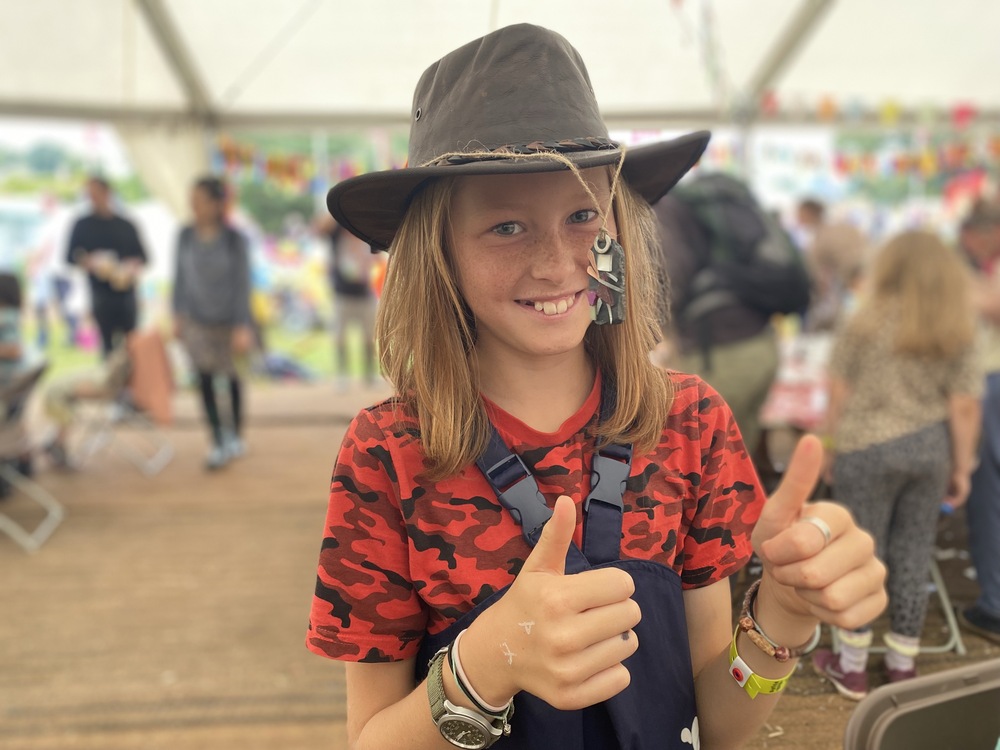 My projected aim is to work in collaboration with partners so that the Street Fairy workshops are able to offer education and skills around personal safety. Giving support and information to those attending, a combination with the power to create strong and positive action. 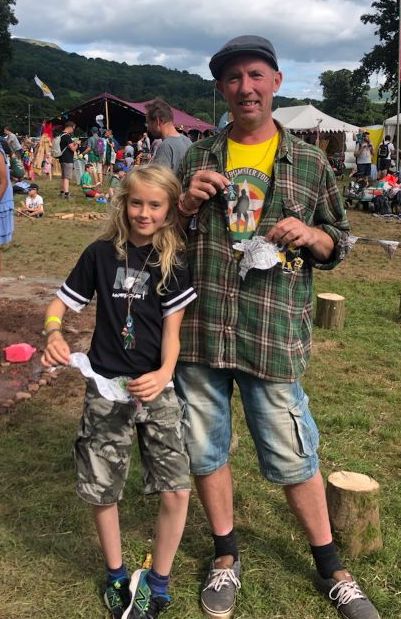 Parents and children gave permission for me to take photographsof them to support a campaign to fund such workshops.

It is a small but a very poignant gesture to give someone a gift and to share words of support, that might give someone a sense of inner and external safety.

Your support could make a difference

As part of the development of the Street Fairy Action, my aim is to create making workshops that enable positive and educational use of the creative arts at festivals, over summer 2022 and beyond. You can support my attempts to gain funding to enable this to happen by sending a message of support to info@stephanierobertsart.com

Please use the word ‘Support’ as the title of the email and explain why you think this project is worthwhile. Your support could make a difference.

If you would like to receive a 'Gift pack' containing a Street Fairy and a fairy making pack with instructions on how to make your own Street Fairies using recycled materials which you may wish to gift to others:

£2 of every £15 pounds raised will be donated to New Pathways, a registered charity that provides support and services to people who have been affected by rape or sexual abuse. For more information about New Pathways see: http://www.newpathways.org.uk 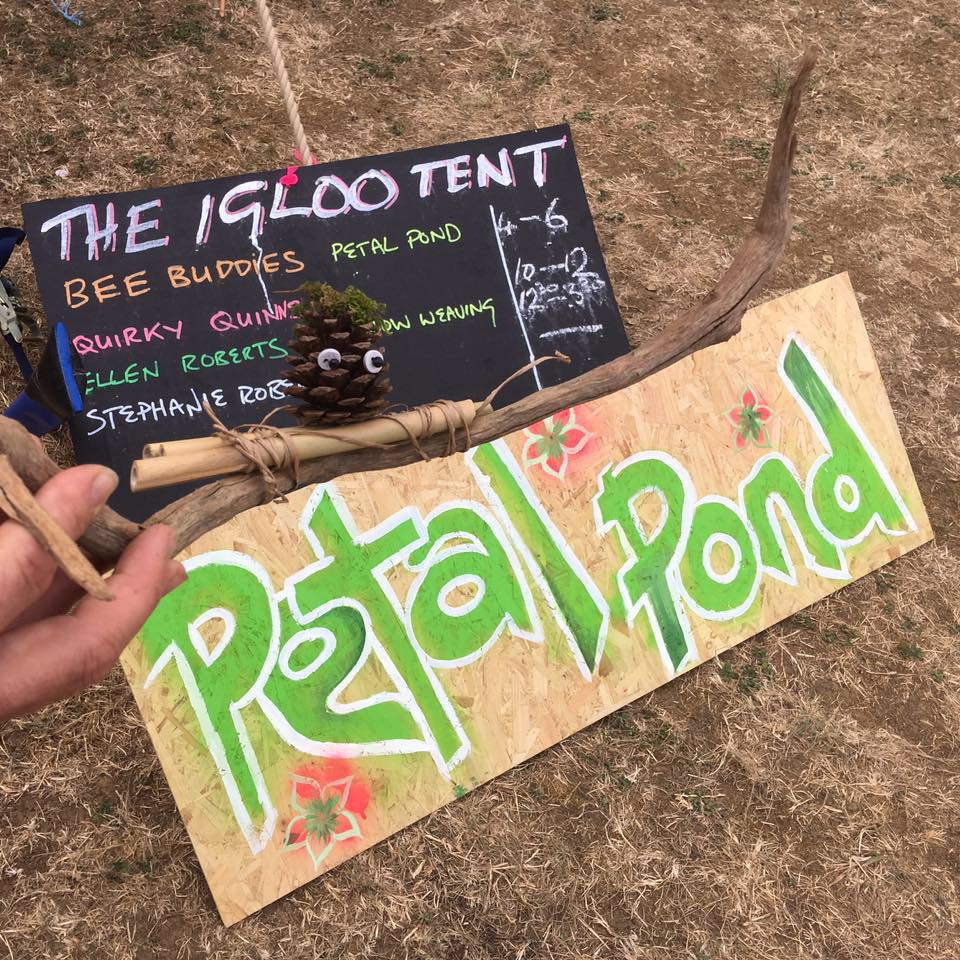