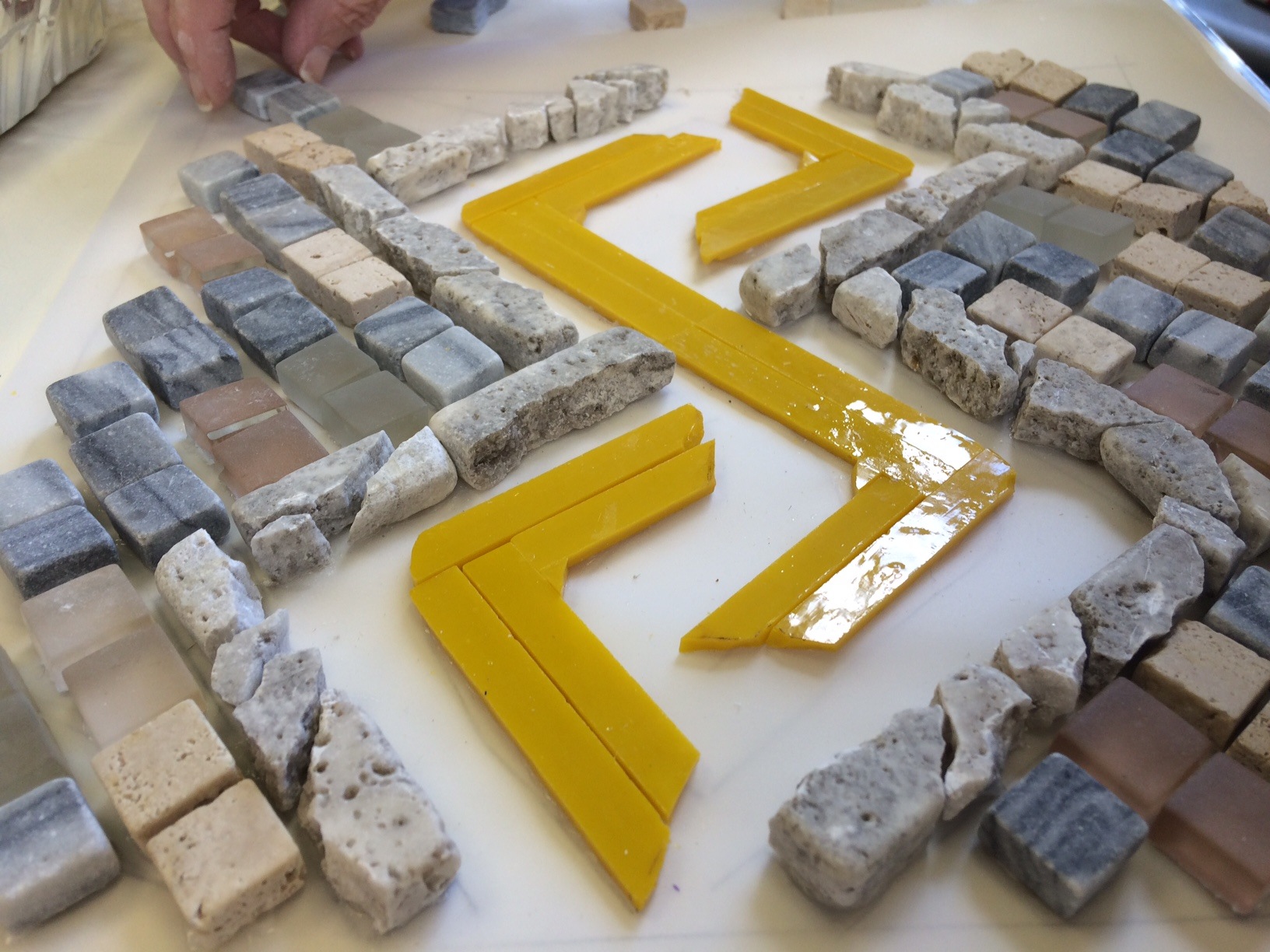 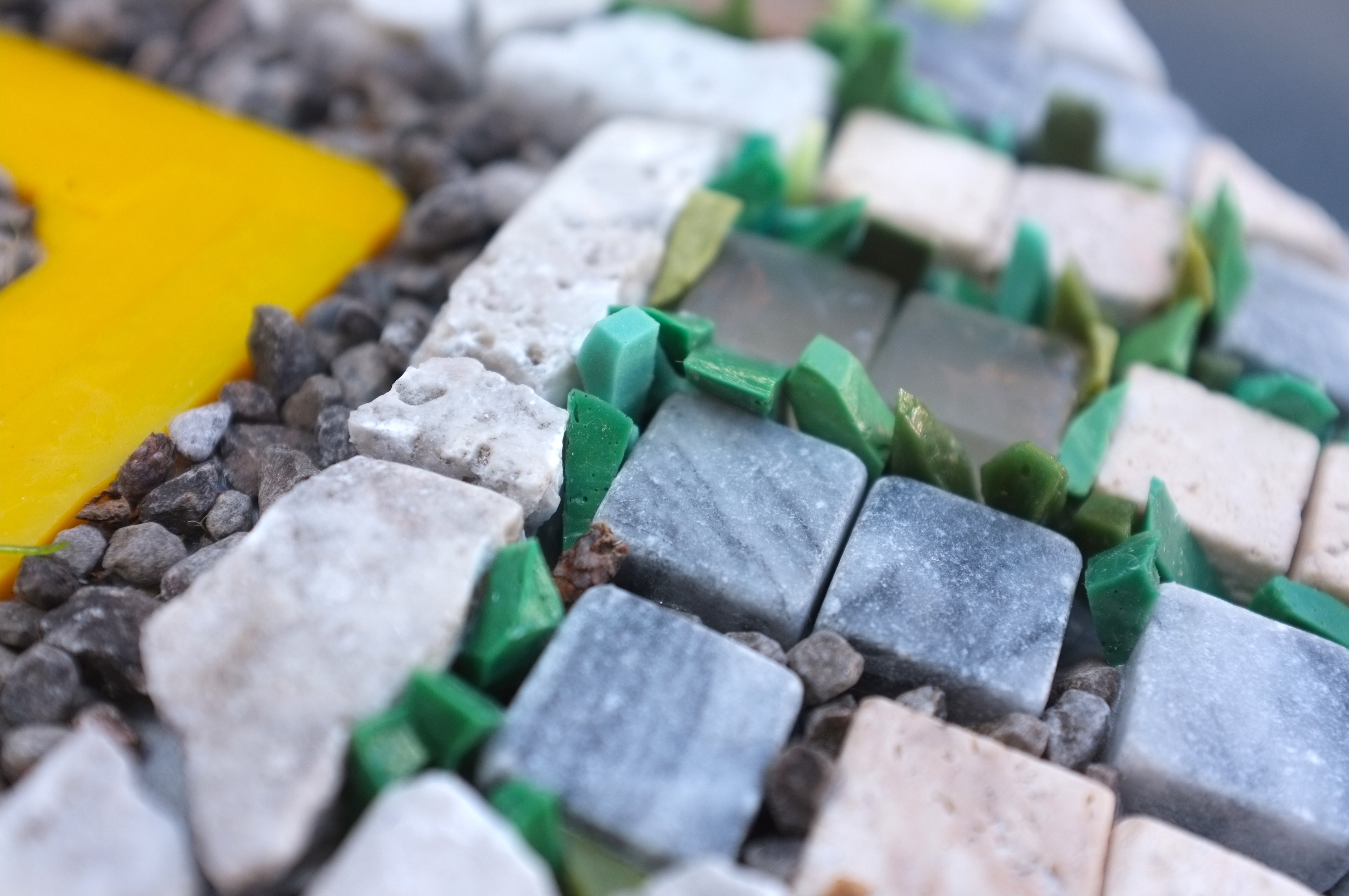 Time and Place -a swatch of maindee

Mosaic Maindee was a project devised to celebrate the architecture, landscape and life of Newport's district of Maindee. Mosaic facades have adorned the shop fronts since the 1960's creating a defined identity to the area – most noted at Cayzer's Menswear. Cayzer's presence on Maindee's 'high street' was the inspiration for the project that unfolded. 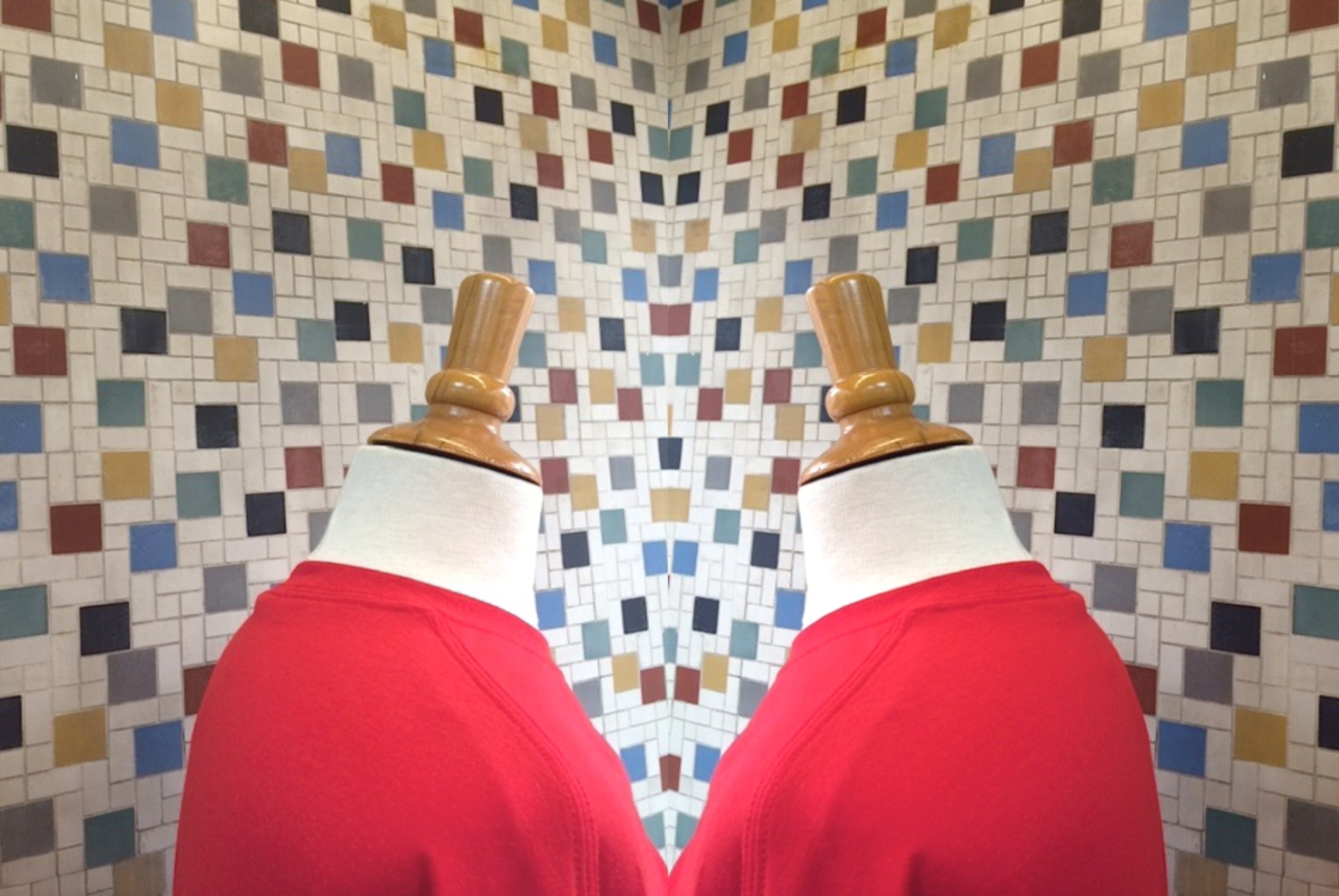 Simple mosaic patterns consisting of square and rectangular combinations with multi coloured tile become the starting point to the group of 11's exploration into pattern and mark making in tile. No one had any prior skils in mosaic art, so we began with an onsite visit to the street and cleaned some tiles to reveal there shine. This also encouraged close observation, allowing my pupils to become aware of the format of the mosaics themselves while bringing public awareness to the project and the mosaics that adorned the street. 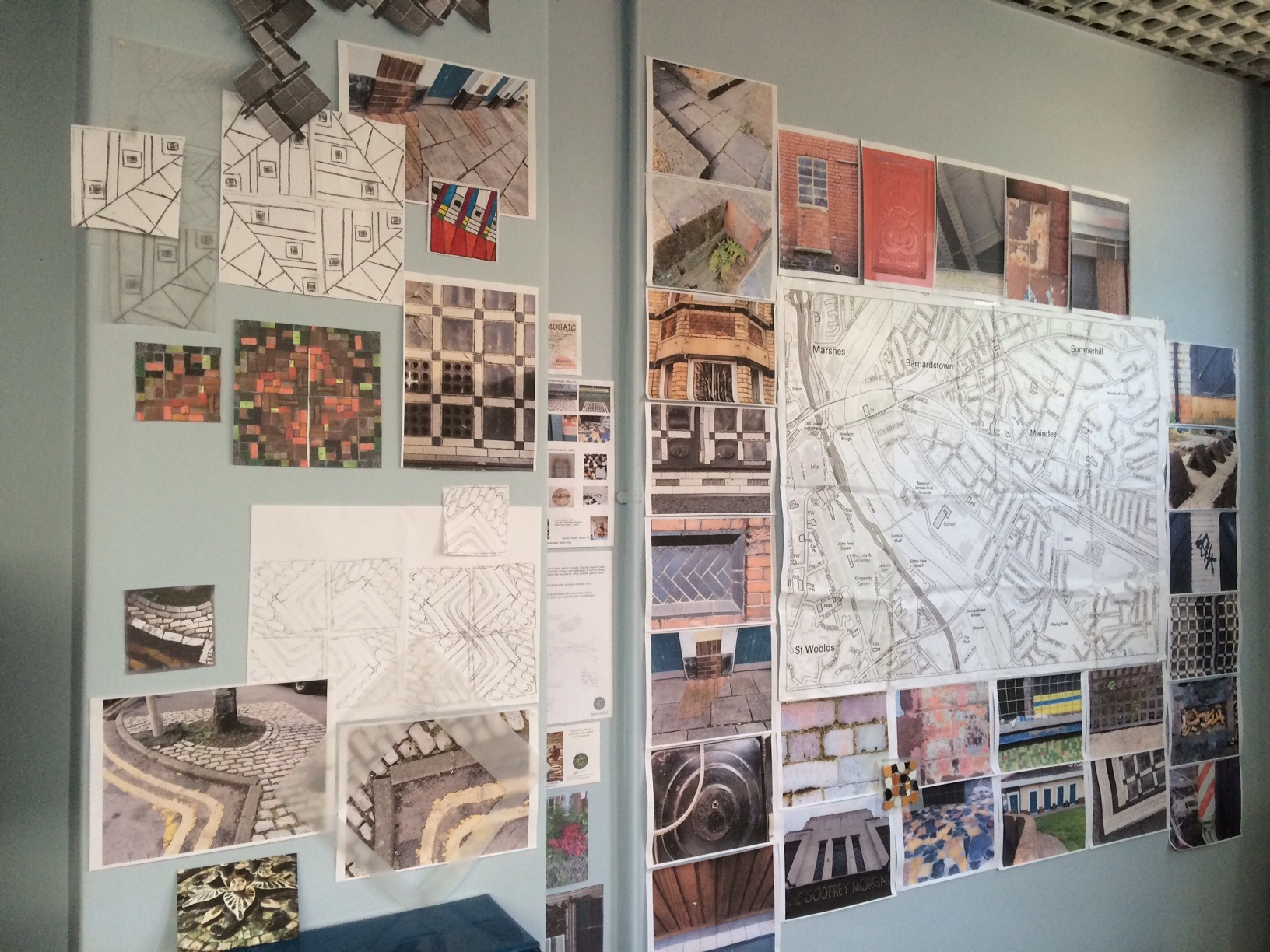 While walking and photographing the environment the group where engaging in conversation, reminiscing and sharing memories of Chepstow Road's shops and utilities from its high times to this recent regeneration project. The photographs taken record this specific time and erea of Maindee - landmark design elements, intentional architectual design or natural/ manmade interventions becoming their place of interest to explore. 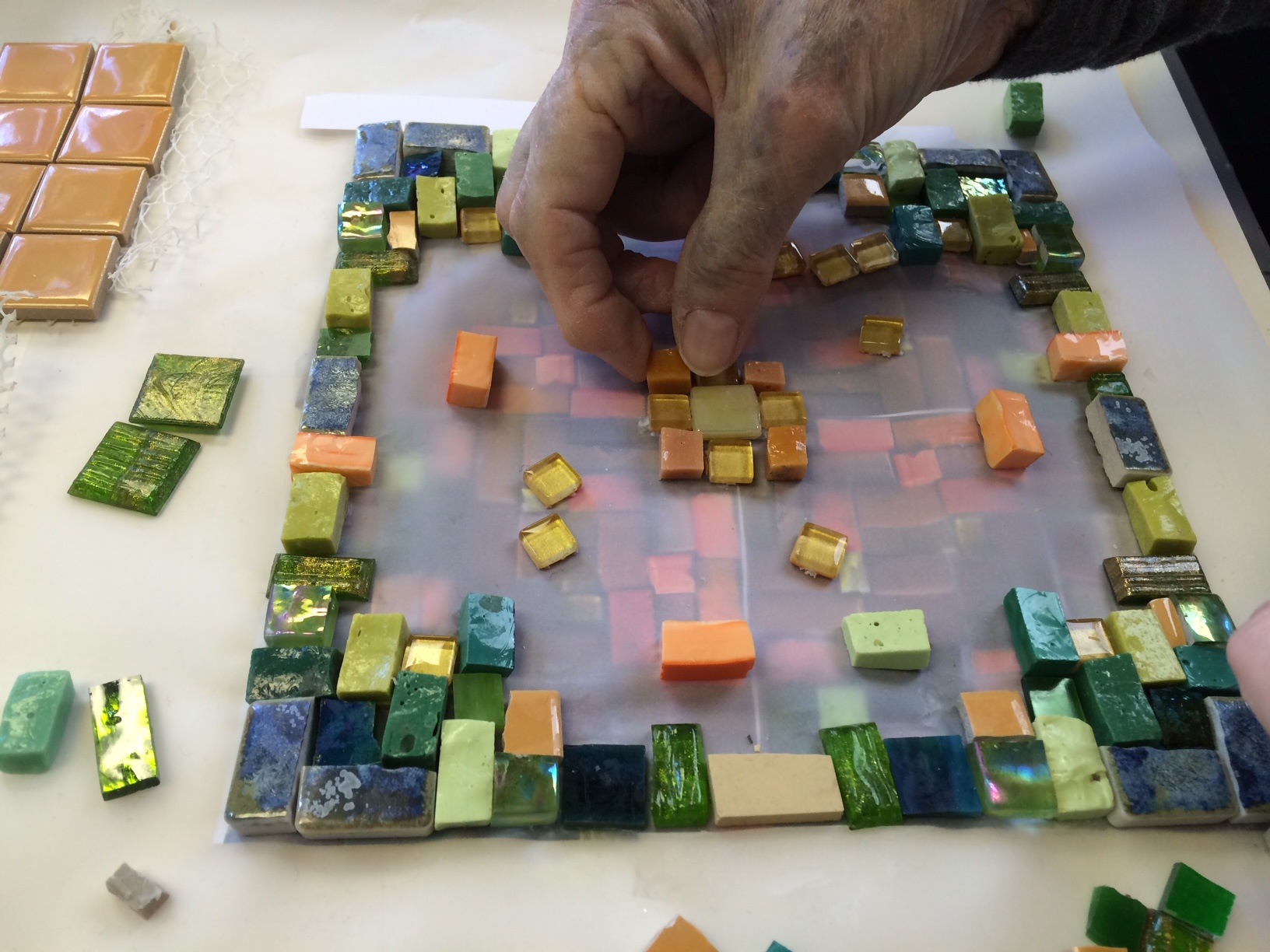 These images and places became the reference material for the 6 week project. To begin an element of the street would be re-created into a mosaic, exploring colour, pattern and the andamento of the flow of tile. Similarly as a swatch of fabric will inspire the design of an article of clothing, these desinns were the research and development to the creation of surface design and potentally urban street art. The patterns developed in an organic way, with each individual exploring their own particlar place of interest. I however wanted to further manipulated these observations and unite the findings by creating a collection of work worthy of a show or exhibition. 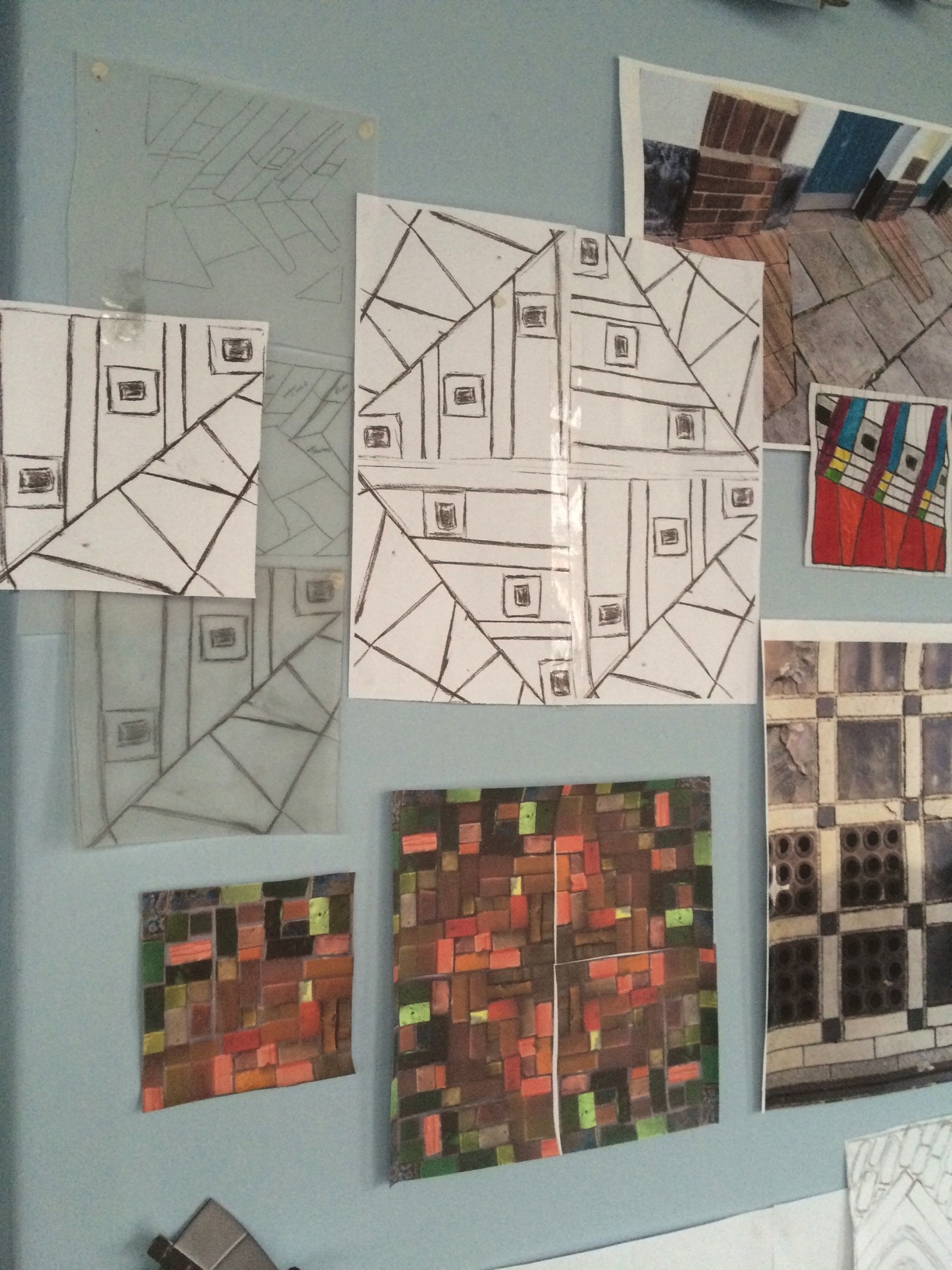 Creating, if you like 'intellectual pattern' we used a process of enlarging the design by reproducing itself to reate a larger square. This way the process and techniques used  were all the same for each individual and through this technique they created their final show piece or 'swatch of maindee'. This process also amplified the emphasis on place of inspiration.

The materials used were a combination of lush iridescent glass, stained glass, stone and ceramic tile, combined with model makers grass, stones and flora from the street. Integrating materials from the street amplified the stories that each piece generated retaining a greater legacy of the ever changing environment. 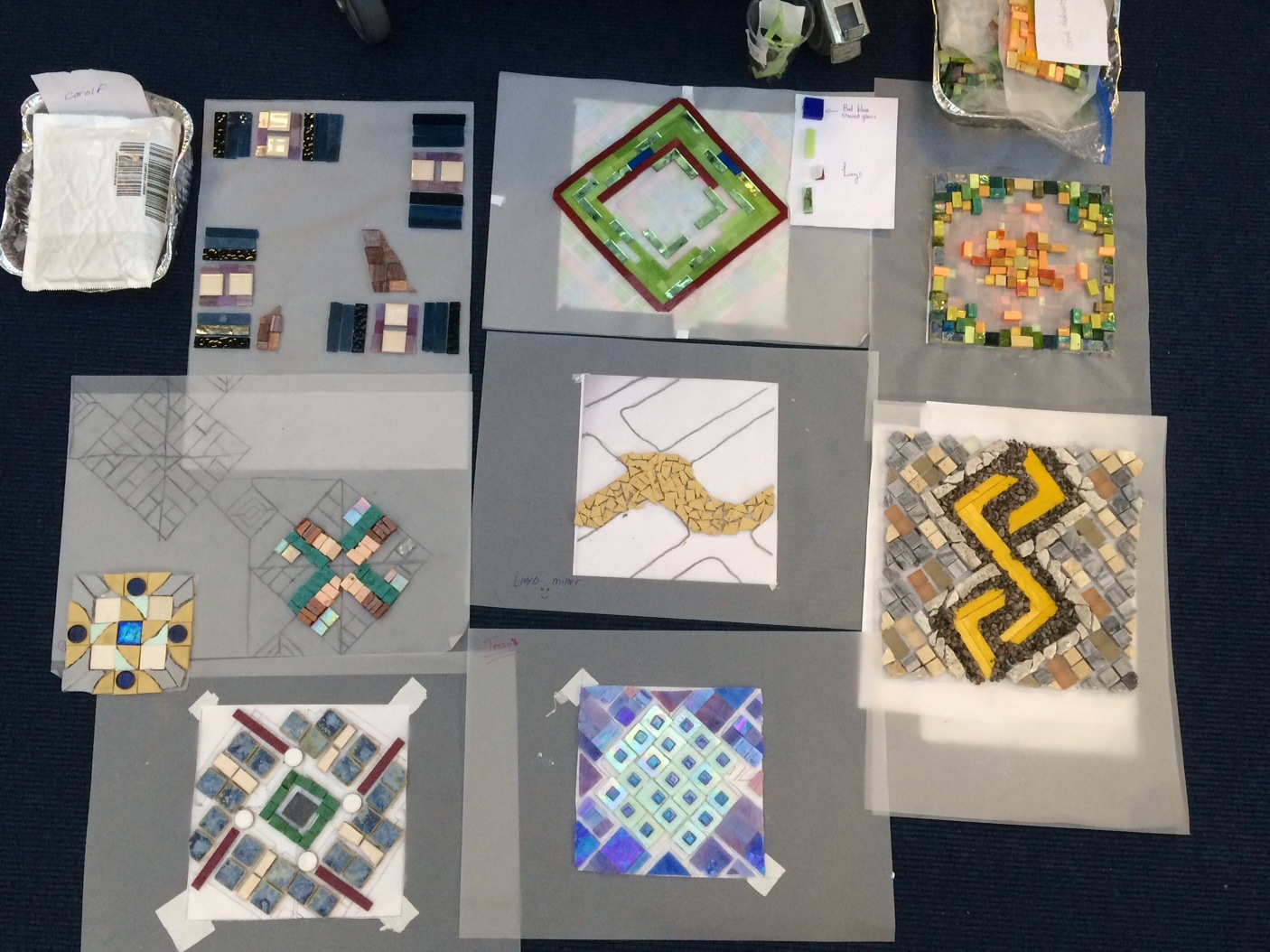 The final pieces will be displayed as part of the iconic window displays of Cayzer's Menswear 1905. The mosaics displayed as fabric hangings like swatches of fabric aim to cross reference the patterns within fabric design to a landscape that is Maindee. 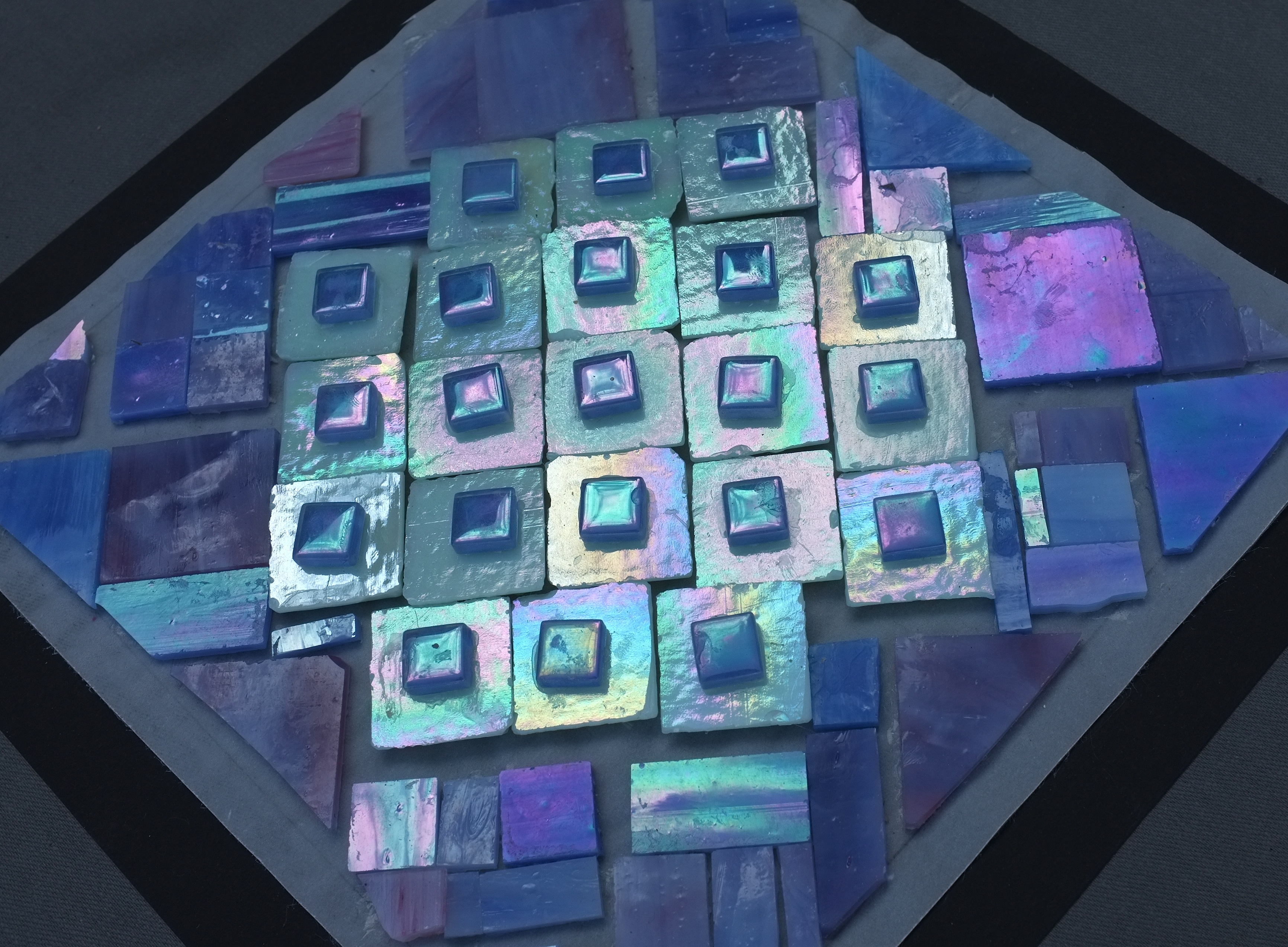 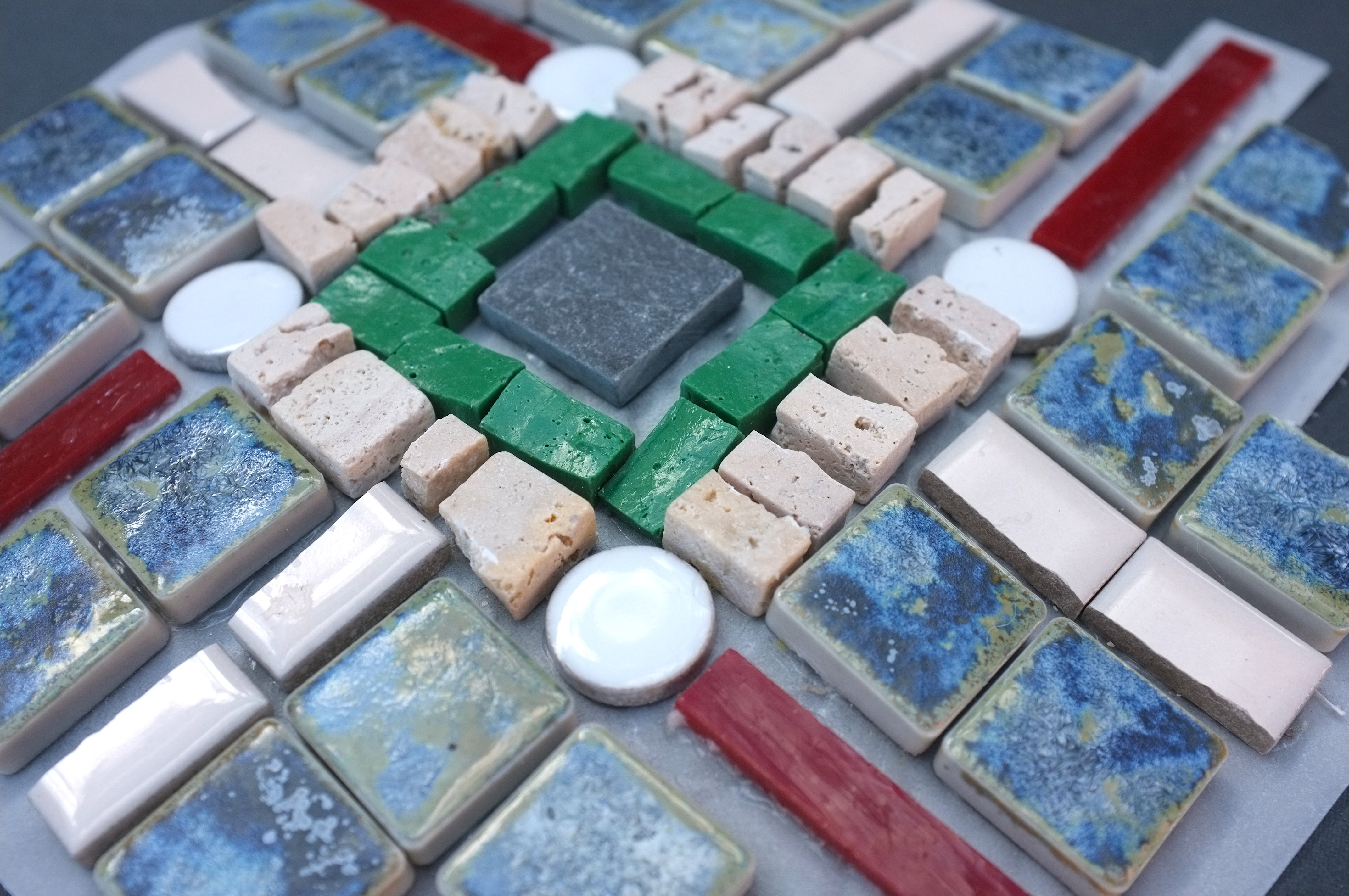 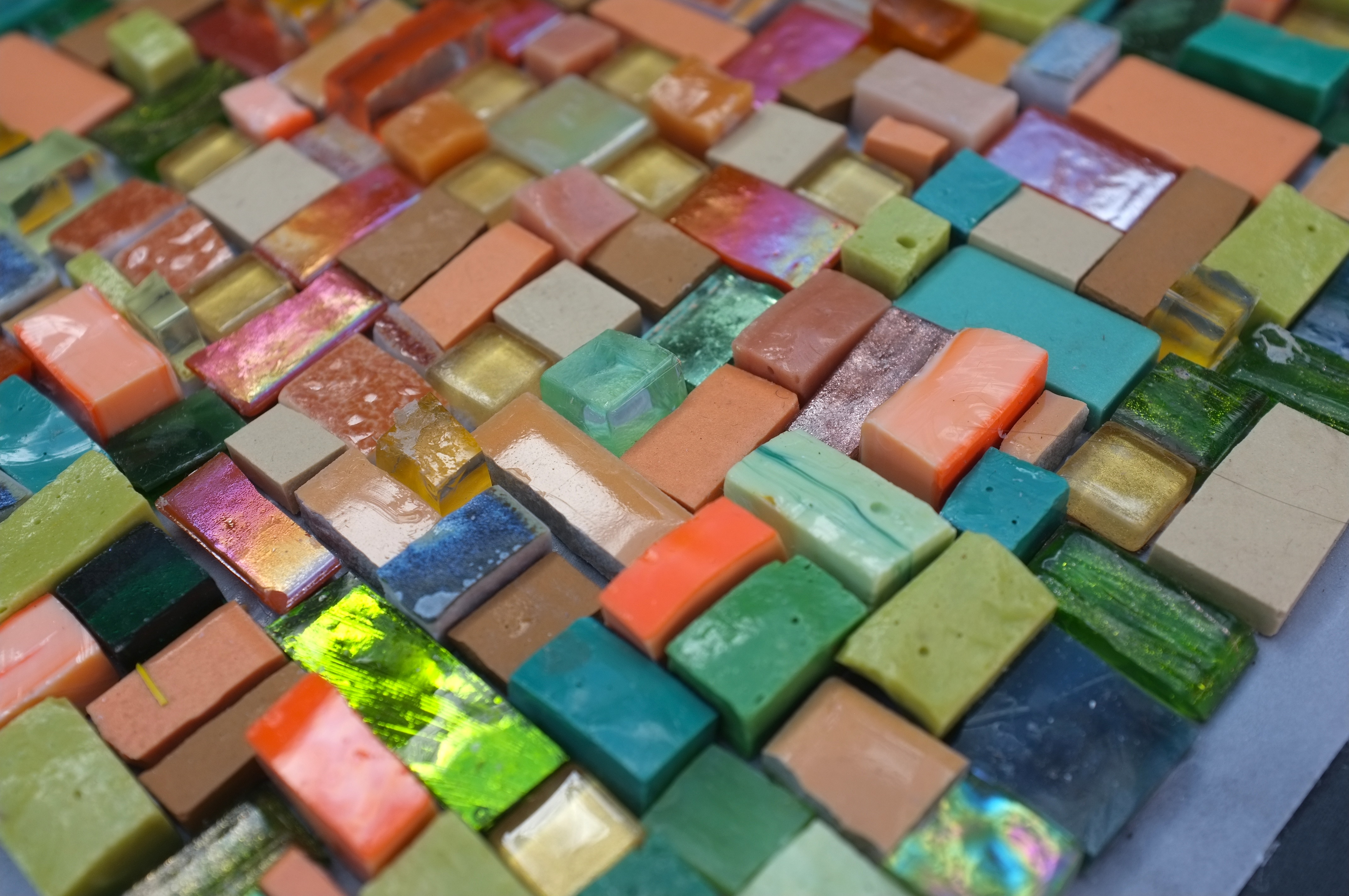 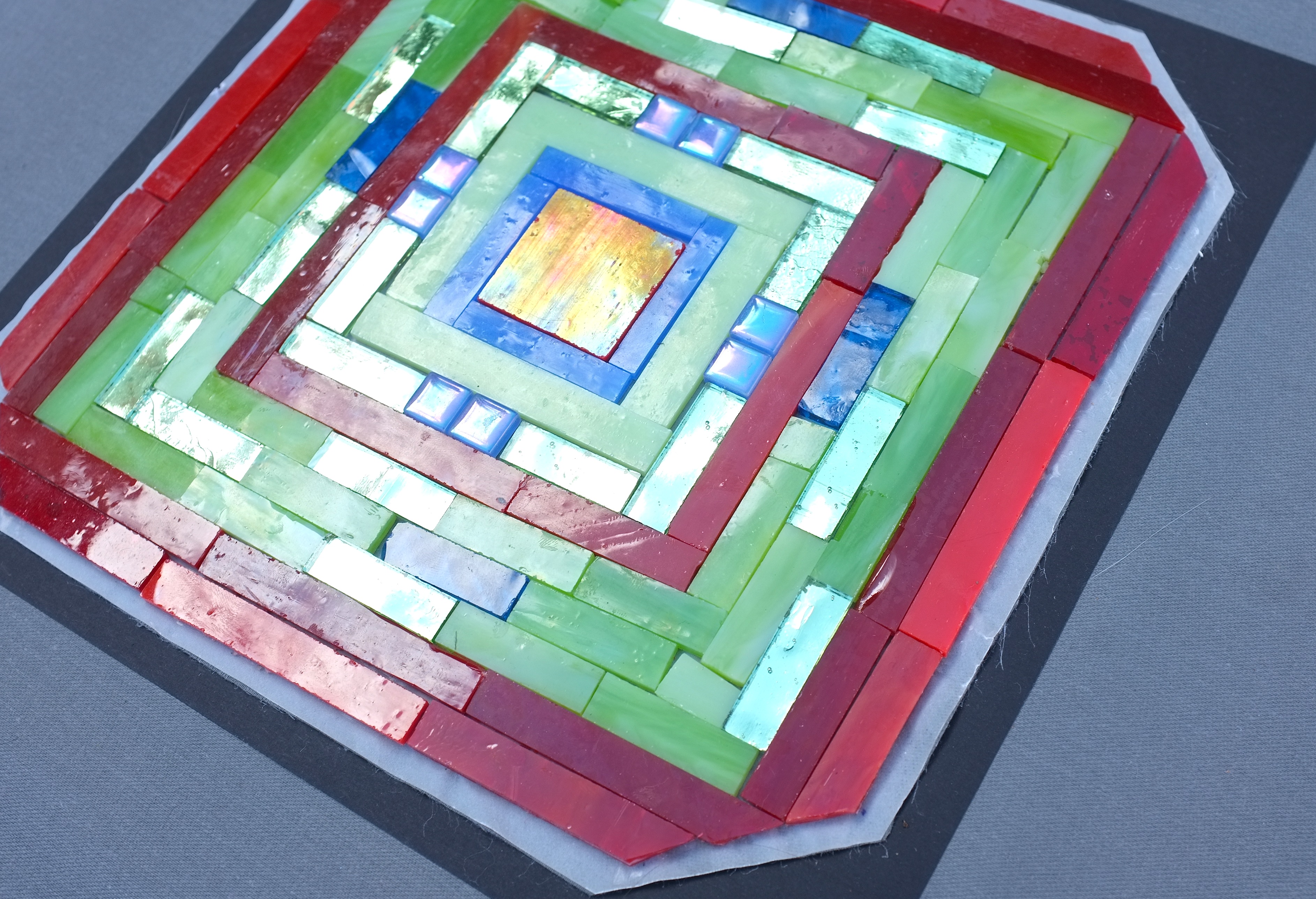 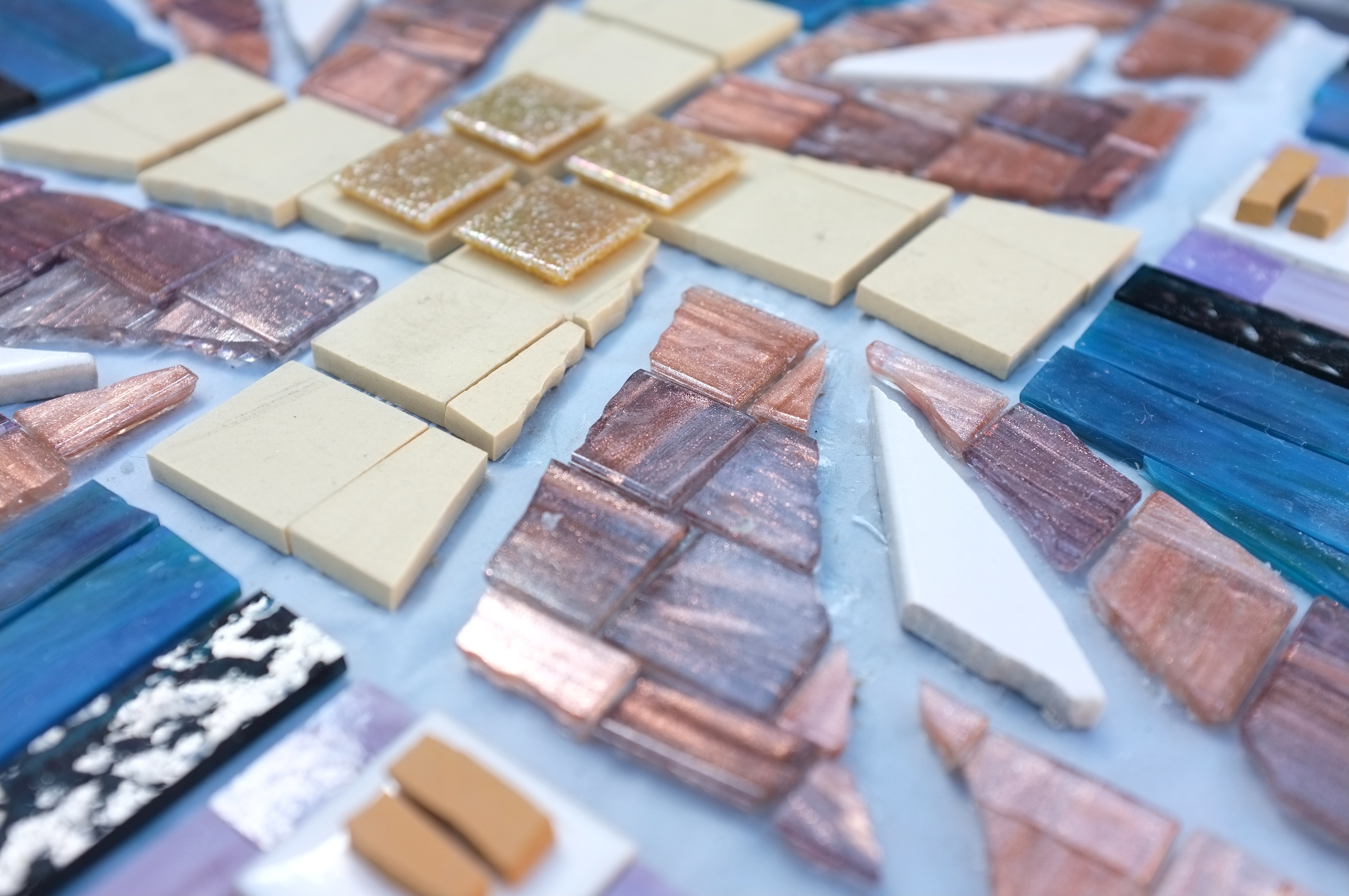 The aim to continue working on creating further projects that support the importance of creative pattern, mosaic art and public art to aid regeneration with in Maindee. 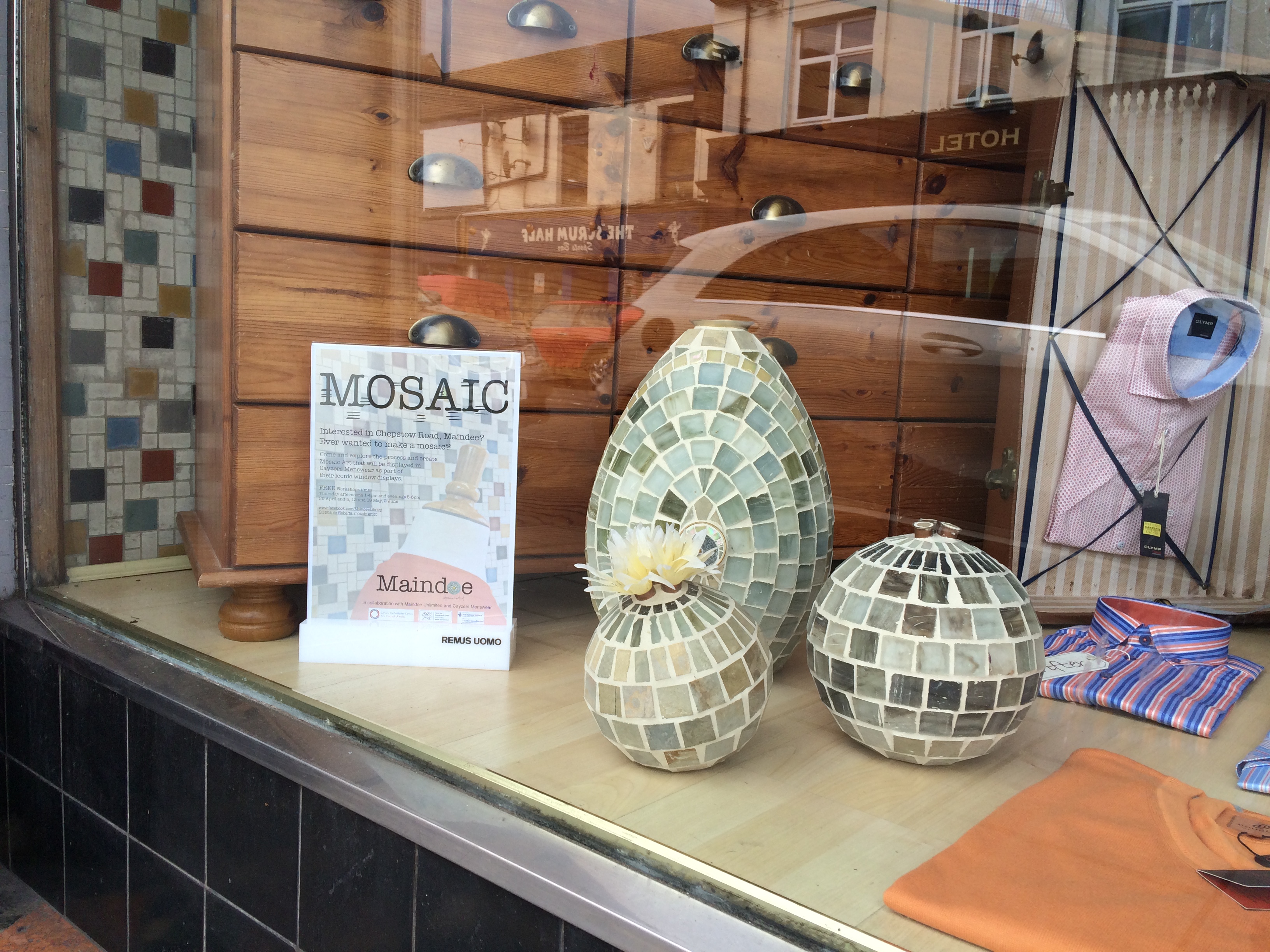 There are plans to redevelop the area named The Triangle and the Library where many of my students gravitated for inspiration. With successful funding, plans to utilise the mosaic artwork in creating surface patern for the site directed by Architect Huw Meredydd Owen may become the projects next development.

This aspect of the project gave the project a special edge for the pupils and a great sense of pride to the work they meticulously designed and constructed. I look forward to the developments of the project.